Disk vs. Disc: A Closer Exploration of Their Difference

Thanks to digital media, the days of floppy disks are behind us, but even beyond storage devices, we still need something to describe flat, circular objects. This is where disc and disk come in. Although the two terms mean the same thing and are interchangeable, they have some slight nuances that you should be aware of. 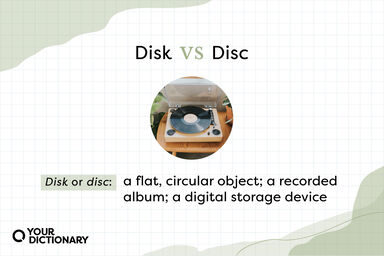 Difference Between Disc and Disk: A Matter of Personal Preference

Disk and disc are alternate spellings that mean the same thing, so you can use them mostly interchangeably without issues. Used broadly, disk and disc can be used interchangeably to refer to a flat, circular, rounded object. That could mean anything from plates to flying saucers. Pancakes and pizza are technically discs/disks.

The Origins of ‘Disk’ and ‘Disc’

Disk is the original spelling of the word. There are no exact records for the change from “k” to “c,” but the word origins might point to the reason. Disk came from the Latin word discus, but that word came from the Greek word diskos, creating that disconnect between “c” and “k.”

When To Use ‘Disc’: Recorded Music

Disc has become the preferred spelling for musical recordings. This initially started in the late 1800s with old phonograph or vinyl records, but it carried over into the modern day with CDs (compact discs) and DJs (disc jockeys). That usage spread globally, so even in the UK, you’ll see records referred to as discs.

Disc may also be more common for everyday objects. For example, the Frisbee was initially marketed as a flying disc, which we still see today in disc golf. Other instances where you’re more likely to encounter disc than disk include:

Across the pond, our British friends prefer to use the term disc for their everyday purposes. However, the fact that computer and technology companies are standardizing the word disk is making it more common in British English. Some speculate disk might become the standardized spelling in both versions of English, but that is yet to be seen.

When To Use ‘Disk’: Digital Storage

Disk has become the de facto standard spelling for forms of digital storage, as seen in floppy disk and disk drive. The exception: CD-ROMs still take after their audio counterparts and are considered compact discs.

Disk tends to be the preferred version of the word in American English. However, there are no hard and fast rules here; plenty of Americans will still use disc.

Disc and disk are interchangeable, and even with the slight regional differences, you don’t need to overthink it. Both American English and British English speakers will understand what you mean when you write disc or disk. Just make sure that your usage stays consistent.