Discreet vs. Discrete: Separating Out the Difference

When you keep a secret, are you being discreet or discrete? Are these two different words, or is one just spelled incorrectly? Learn how to use discreet vs. discrete in a sentence, and decide which word you really want to use. 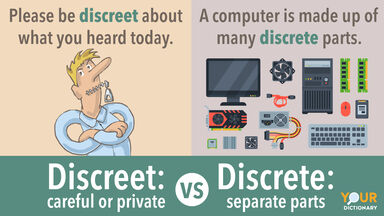 The Difference Between Discreet and Discrete

The adjectives discreet and discrete are homophones, which means that they sound the same but have different meanings and spellings. Their main difference is in their definitions:

When you keep a secret to avoid hurting someone's feelings, you're being discreet. When you sound out a word by its syllables, you've divided the word into discrete parts.

Tips to Remember Discreet vs. Discrete

Even though the words discreet and discrete aren't commonly used in conversation, you want to be sure you're using the correct one when you need it. A few tips to remember the differences between them are:

How to Use Discreet

Examples of discreet in a sentence include:

How to Use Discrete

The word discrete describes items or concepts that are separate and not related to each other. Discrete motor skills, for example, are single units of activity with short durations (such as throwing or catching a ball). In linguistics, the consonant sounds /b/ and /p/ are discrete sounds that are not connected to each other.

Additional examples of the word discrete include:

Word Origins of Discreet and Discrete

If these words are so different, why do they sound so similar? The answer lies in their Latin root discretus, past participle of discernere ("to separate"). The Latin term entered English as discrete, while an Old French version of the word became discret (later discreet). Both words are loosely connected to discern, another English word from discernere that means "to distinguish or recognize."

Don't Be Discreet About Your Vocabulary Skills

Even experienced grammarians struggle with tricky word pairs such as discreet and discrete. But straightening out these vexing vocabulary puzzles is an important part of developing your writing skills! Once you're ready for another challenge, see if you can tell the difference between systemic vs. systematic.