Disinterested vs. Uninterested: A Prefix Changes Everything

When someone tells you a boring story, your attention may start to wander. That's because you're uninterested — or is it disinterested? These words may seem like synonyms, but their definitions are actually quite different. 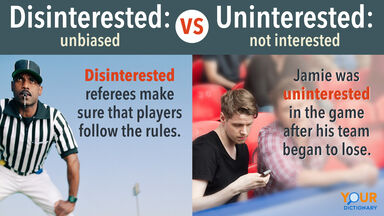 Both disinterest and uninterest mean "not interested." Why aren't they interchangeable? The answer lies in the two meanings of interested: "engaging the mind" and "biased in one direction" (also known as "vested interest").

The double meaning of interested makes these words confusing, not to mention the similarity of their prefixes (dis- means "away from," un- means "not"). But another confusing detail of disinterested vs. uninterested is that they used to have the opposite meanings!

While their modern definitions have been in place since the late 18th century, the words are often still used interchangeably, and many dictionaries list both meanings for both words. However, proper use of disinterested does not make it a synonym of uninterested.

When someone is disinterested, they are unbiased and have no vested interest in the matter. They have nothing to lose and nothing to gain.

If you're trying to say that someone was bored or not engaged by an activity, use the word uninterested. It's the clearest way to express that a person was "not interested." For example:

Does the Difference Matter?

The above sentences may feel odd to you if you're used to using disinterested to mean "not interested." So if other writers these words interchangeably, and the dictionaries even include the definition, does the difference between disinterested and uninterested even matter?

It does matter when it could result in reader misunderstanding. For example:

At first glance, these sentences seem to say the same thing: "Jack didn't care about the outcome of the election." But if you understand disinterest to mean "unbiased," then the first sentence implies that Jack has no personal stake in the election. He may care about it a lot, but it won't affect him either way. That's why only using uninterested to mean "not interested" is the best way to avoid misunderstanding.

Have a Vested Interest in Proper Word Choice

Using the correct word is a small but significant way to improve your writing. Mastering confusing word pairs such as disinterested vs. uninterested can help you communicate clearly without sending the wrong message. If you'd like to clear up additional word mix-ups, check out a guide on mistrust vs. distrust.