Both dissociation and disassociation are serious ways to separate a connection. While these words sound (and look) similar enough to be the same word, their slight differences keep them from being synonyms in every context. Take a look at the different ways to dissociate vs. disassociate, and you'll never mix these terms up again. 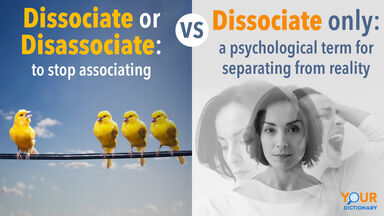 Dissociate and Disassociate Are Synonyms

In modern usage, dissociate and disassociate are essentially synonyms. They're verbs that mean "to stop associating." Dissociate is slightly more popular, probably because it's shorter and easier to say ("dis-SOH-see-ate" vs. "dis-uh-SOH-see-ate"). Either of these sentences would be correct:

Easy enough, right? Not so fast. There's one important time when dissociate and disassociate are not synonymous: in the field of psychology.

So if these words can be used interchangeably in everyday writing, why do they both exist? Both words use the Latin prefix dis- ("not") and the Latin word sociare ("to unite with") to form the same general definition: "not to unite" or "stop associating."

However, dissociate only has a Latin background, while disassociate comes from the Old French désassocier ("to separate"). Both words appear in English with the same basic meaning when not referring to psychology.

Using Dissociate as a Psychological Term

The word dissociate is a psychological term that refers to a split within a person's psyche. It's a defense mechanism used by trauma survivors to remove themselves from a threatening situation within their own minds. In severe cases, it may cause a person to temporarily break from reality.

A person with a dissociative disorder becomes disconnected from the events in their reality, as well as their memories and even their identity. You can't use disassociate in this context.

Outside of the psychological world, disassociate is a verb that refers to "cutting ties" or "not joining in." Because it's less popular (and harder to pronounce) than dissociate, you may find that your spellchecker or reader recommends using dissociate instead. However, disassociate is a real and proper word to use.

If these sentences feel awkward to you, you're probably used to using dissociate instead. Feel free to use the words interchangeably (unless you're writing about psychology).

The Bottom Line for Dissociate vs. Disassociate

So when can you use each of these words? The rules are:

One potential error with disassociate is how easily misspelled it is. Because dissociate has two s's in the first syllable, it can be easy to mistakingly write dissassociate (or even disociate), both of which are incorrect. Whichever word you choose, make sure you're spelling it correctly.

Forming a Positive Association With Grammar

Becoming a better writer takes a lot of work, but it doesn't have to be that hard. Clearing up misunderstandings between words such as dissociate and disassociate is a simple way to improve your writing. For more quick fixes, take a look at another confusing word pair that involves the dis- prefix with a guide to disinformation vs. misinformation.