Due to vs. Because of: Distinctions and Proper Use

Did they cancel the baseball game due to the rain or because of the rain? Believe it or not, these phrases aren’t synonyms. Read on to learn about the slight distinction between due to and because of – and when to use each one. 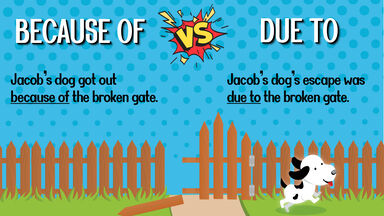 Because of vs Due to Example
Advertisement

Both because of and due to are effective ways to link an event and the reasons for it. Their similar meanings make it seem like they can be used interchangeably. However, using one in place of the other is incorrect because they are not the same part of speech.

The word because is a subordinating conjunction. However, when combined with of, it becomes a preposition. It works as an adverbial prepositional phrase when used with other words to modify a verb.

You can usually identify adverbs when they end in -ly. For example:

Both because and because of can elaborate on the verb on the sentences. However, neither use is interchangeable with due to.

Due to is an adjective, which describes or modifies a noun. When combined with the rest of the sentence, it functions as an adjectival prepositional phrase. You can’t use due to in the same way as because of.

Here are some sentences that use due to when modifying a noun.

If you try to replace due to with because of, it doesn’t sound completely incorrect. That’s why many writers make the mistake of using them interchangeably. If you want to use because of in these sentences, you’d need to add or change verbs that it could modify. For example:

The Trick to Telling the Difference

The verb to be and all its forms (am, are, is, was, were) are the key to telling because of and due to apart. If a sentence has a version of to be, use due to. If it doesn’t, use because of. Here are some due to vs. because of example sentences:

The difference between these usages is subtle but important. If a sentence sounds awkward one day, you can always reword it to clarify your meaning. You’re more likely to find due to in formal writing, while because of is present in informal writing and conversational speech.

Many writers are more comfortable with due to at the beginning of a sentence than because of. They choose due to because they worry that starting a sentence with because might result in a sentence fragment. However, the opposite is actually correct. For example:

It seems like due to is modifying demand. However, it’s actually modifying agreed – which is a verb. In that case, because of is the appropriate choice.

There’s almost no instance when due to can start a sentence because there is no noun for it to modify. However, if you ensure that the sentence is not a fragment, starting a sentence with because or because of is perfectly acceptable. (If you still don’t like it, just include the adverbial prepositional phrase at the end of the sentence instead.)

Due to the Fact That

If you find the words due to the fact in your writing, edit them out immediately. Using the word fact is an unnecessarily wordy way to use due to. For example:

These sentences are technically correct, because due to modifies the noun fact. However, they are wordy and difficult to read. One option is to use because of instead.

Although better than before, these examples are still a little stilted because they only have one verb (canceling, failed, is). Try using because without the of as a subordinating conjunction. That way, you can include a verb in each clause.

The bottom line is that you never need to use due to the fact that in your writing. The same goes for the clunky phrases like on the grounds that and owing to the fact that. Because is a great alternative that won’t give your reader a headache.

Do other grammar concepts have you wondering? Clear up commonly confused words and phrases with more informative articles. See if there’s a difference between over and more than when describing quantities, or find out whether whoever or whomever is the right word to use as a relative pronoun.