The Do or Due Decision: Rules to Use the Right Word

When it comes to the English language, nothing is quite as frustrating as homophones. These are fun little words like “do” and “due” that have different spellings and meanings but are pronounced the same way. To eliminate any confusion, get simple rules for when you use "do" vs. "due." 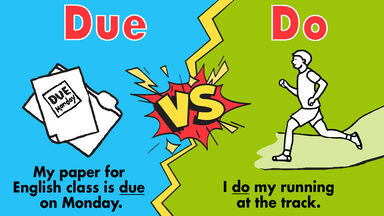 example due vs do
Advertisement

How can you know when to use “do”? By looking at its definition, of course. The verb “to do” means you are performing some kind of action. In a sentence, this looks like:

You will also find “do” used as an auxiliary verb to clarify action in a question like:

"Do" can also function as an auxiliary verb in negative statements. For clarity's sake, the examples will avoid the contraction don’t, but just remember it could be in there too. For instance, the first example sentence could be rewritten as, "I don't believe aliens exist."

Another way to remember the difference between “do” and “due” is to look at the tense and conjugation of "do."

Different Forms of “Do”

Since “do” is a verb, it can have different forms that it will take depending on the tense. Since it is an irregular verb, it only has one change in present tense conjugation. The third-person plural uses “does.”

She does her chores every Saturday.

She did her chores last Saturday.

You have now mastered the rules of “do.” Great work! It’s time to move on to “due.”

When it comes to using “due,” the term is going to work as an adjective (to show something planned/expected or needs to be paid) or as a noun (in the plural form: dues). You can see how these are used in example sentences to drive this point home.

Those are the main differences between "do" and "due." Since you've mastered them, have some fun with "do" and "due" idioms too.

Idioms Using “Do” and “Due”

English has a lot of expressions. It is one of the fun things about the language. But, it can be difficult when it comes to trying to figure out whether to use “do” or “due” in these idioms.

Another fun idiom in the English language is "due to the fact (of)," which is generally shortened to “due to.” This usually signifies that one thing is attributed to or caused by something else. "Due to" is usually followed immediately by a noun.

“Do to” can also be used in a sentence, but the meaning and context are difference. This is typically found in "what" questions with a verb coming immediately after "do to."

One quick trick to know if you should use “due to” or “do to” is to see if it can be replaced with "because." If it can, then "due to" is correct.

Not a Problem for the Brits

Difference Between “Due” and “Do”

Knowing when to choose “do” over “due” is just a matter of following the rules of grammar. Are you interested in learning more about idioms? View a lot of fun idiom examples. They are a dime a dozen!