Which is fancier — prince or duke? Though they both sound like historical titles from once upon a time (and they are), there are still many princes and dukes in the 21st century. The question of which one is fancier depends on the man in question — though when it comes to duke vs. prince, one rank is decidedly higher than the other. 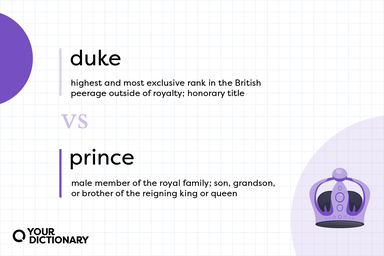 definitions of "duke" and "prince" from the article
Advertisement

Meaning of “Duke”: Ruler of a Territory

The word duke comes from the Latin dux, meaning “a leader,” and the French duc, meaning “a military commander.” It’s the highest and most exclusive rank in the British peerage (nobility ranking) outside of royalty, with the earliest dukedoms (the status of being a duke) dating back to the 14th century.

The title of duke is often hereditary, meaning that one’s dukedom can be passed from father to son, though dukedoms can also be conferred (given) by royalty. Traditionally, a duke had sovereign rule over a physical territory or duchy — today, duke is more of an honorary title than a job description.

What Is an Archduke?

The title archduke (“primary duke”) refers to a duke with the highest political power and status. It ranks below an emperor or a king, but above other members of the royal family. The territory of an archduke is an archduchy.

Archdukes primarily referred to rulers of the Austrian House of Habsburg between the 14th and 20th centuries. Unlike duke, the title of archduke does not appear in the British peerage.

What Is a Grand Duke?

A grand duke rules over an independent state (a grand duchy) that is not large enough to be a kingdom, but more significant than an average duchy. Although this ranking also does not appear in the British peerage, there is still a grand duke in power today: His Royal Highness Grand Duke Henri of Luxembourg.

Meaning of “Prince”: Son or Grandson of the Monarch

The son or grandson of the reigning king or queen is known as a prince. The word prince comes from the Latin princeps (“first person”), like the word principal, and indicates that a male member of the royal family is in line for the throne.

What Is a Crown Prince?

The term crown prince refers to one prince only — hereditary heir to the throne. Also known as the heir apparent, a crown prince will become king when his reigning parent dies or abdicates (leaves) the throne. He is usually the firstborn son of the king, or if the king has no children, the next-oldest brother of the king.

What Is a Prince Consort?

A prince consort is the husband of the sovereign queen. This differs slightly from when a woman is married to the sovereign king, as her title is queen consort. Because some may see a king as more powerful than a queen (despite their equal status as hereditary monarchs), naming the queen’s husband as king regent may diminish her power to some. Therefore, his title is prince consort instead.

If the prince consort has a peerage title — which he usually does — he's often referred to by that title and prince consort (as with Queen Elizabeth II's husband, Prince Phillip, Duke of Edinburgh).

What Is a Grand Prince?

Grand prince is not the grandson of the prince. It’s a title of nobility just below king, but above a crown prince. The term grand prince indicates he is the head of state of his principality, which is a smaller territory than a kingdom.

Grand prince was a popular term during medieval times, particularly in Russia, where Grand Prince Ivan III (known as Ivan the Great) ruled over the Grand Principality of Moscow. Today, Monaco and Liechtenstein are principalities ruled by princes, not kings.

What Is a Prince Regent?

A prince regent rules in place of the monarch of his territory. They have the power of the crown when their reigning parent is absent or debilitated, much like a vice president in the American government. If their parent returns to their rule, they take back their power; if their parent dies or cannot return to their role, the prince becomes king.

Is Duke or Prince Higher?

All told, the official ranking of a nobleman or royal depends on the situation and the specific title one holds. Most of the time, a prince outranks a duke in the peerage system.

However, if you define “higher ranking” by “having more power,” a duke could be higher than a prince. A duke rules his own duchy, while a prince might not have territory of his own (unless he is a grand prince). Additionally, archdukes and grand dukes have the same ranking as a king, which is also higher than a prince.

What about female members of nobility and royalty? Most of the same rules apply to princesses and duchesses (the female equivalents of princes and dukes).

Additionally, a duchess can gain her title by marrying a duke, or by having monarch confer dukedoms to both her husband and herself. If a woman marries a prince, she becomes a princess consort, not a princess regnant (hereditary princess).

Can Someone Be a Duke and a Prince?

The ranking system gets even more complex when you factor in a royal duke — a member of the royal family who receives a dukedom from the reigning monarch. These dukedoms are conferred by the sovereign, but only to those who are also royalty. Often, they’re given on the prince’s wedding day.

In other words: A prince can become a duke, but a duke can’t become a prince if he’s not part of the royal family. Therefore, a prince is more often higher in ranking than a duke.