Either or Neither? Simple Tips on How to Use Each Word

It's easy to mix up either and neither. They both refer to making a choice, but the outcome is different depending on the word you use. This simple guide can help you decide between either and neither, so you choose the right word every time. 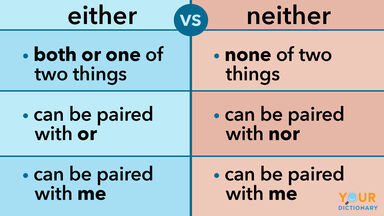 either vs neither chart shows difference
Advertisement

Choosing Between Either and Neither

The definition of neither is "not either." When presented as a choice between two things, either and neither mean:

You can also separate the two choices with either/or or neither/nor. For example:

Using Either as Different Parts of Speech

The word either can function as four different parts of speech (adjective, pronoun, adverb, and conjunction). Explore the meanings and usage of each part of speech with sample sentences that demonstrate the correct usage.

How to Use Either as an Adjective

When you use either as an adjective, it means "both of two things" or "one or the other of two things." For example:

How to Use Either as a Pronoun

When either functions as a pronoun, it refers to one or the other of two things. The pronoun form takes the place of a noun instead of describing or modifying a noun.

How to Use Either as an Adverb

The adverb form of either means "also not." It is the last word at the end of a negative statement or assertion, placed there for emphasis. You can separate it from the rest of the sentence with a comma, but it works without a comma as well.

How to Use Either as a Conjunction

When the word either functions as a conjunction, it connects two or more options with the word or. For example:

Using Neither as Different Parts of Speech

Like either, you can use the word neither different ways in a sentence. Check out several examples of neither as an adjective, a pronoun, an adverb, and a conjunction.

How to Use Neither as an Adjective

The adjective form of neither means "not either." It describes a noun who is not participating in a choice.

How to Use Neither as a Pronoun

Neither as a pronoun means "not either or none." It has the same meaning as its adjective form but substitutes a noun.

How to Use Neither as an Adverb

When neither is used as an adverb, it too means "also not." This form of neither appears within a sentence rather than at the end.

How to Use Neither as a Conjunction

When used as a conjunction, neither means "also not." It connects with the word nor to indicate that none of the choices are an option.

Me Either vs. Me Neither

You may hear the informal phrases "me either" and "me neither" in casual conversation. These phrases mean "me also" or "me too" to agree with a negative statement another person is making. Depending on your preference, you could say "me either" or "me neither" to the following phrases:

Both are correct in a conversational context, but neither phrase is grammatically correct because they're not referring to a choice — they're simply a better way to say "I don't like that, too." If you want to be more technically correct in your speech, you can say "Neither do I" in response to a negative comment.

Either and Neither Exercises

Test your ability to correctly choose between either and neither with these practice exercises. The answers are immediately below the practice items, so be careful not to skip ahead until you've tried to get the answers on your own.

Either and Neither Practice Questions

Decide whether neither or either is the correct choice to complete the sentence.

Have you already answered the practice items on your own? Look below to check your work.

Making Sense of Neither vs. Either

Now that you know more about either and neither, you're ready to tackle more terms that are hard to tell apart. Get started by figuring out when to use continual vs. continuous. After that, you'll be ready to master all of the commonly confused words.