Eldest vs. Oldest: The Greatest Difference

If you are the firstborn in your family, you can refer to yourself as either the eldest or the oldest. But that's not the case with every noun! Determine when you should use eldest vs. oldest in a sentence and how their grammatical functions can be quite different. 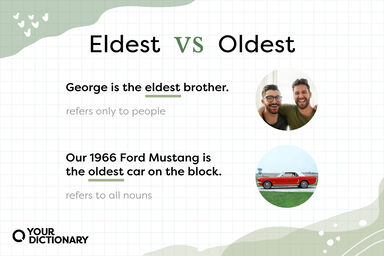 The superlative adjectives eldest and oldest can both refer to a person with the most advanced age. But in every other situation, these words aren't interchangeable.

If a family has three daughters, you can refer to the firstborn as the eldest or as the oldest. But if you're talking about other nouns, such as houses in a neighborhood, the first one that was built is the oldest house.

Use Eldest for People

The word eldest describes the firstborn member of a family group, typically in a set of siblings. It can also refer to the oldest person in an extended family. When you're using eldest, you're describing family relationships.

Eldest as an Adjective

Eldest most often appears as a descriptive adjective before the noun (such as "eldest son") but can also function alone when describing a child. For example:

If these sentences feel a little old-fashioned to you, you're probably used to using oldest instead of eldest. While oldest would be grammatically correct, eldest is a more accurate word to use when describing family relationships.

Eldest as a Noun

Like most superlatives, eldest can function as a noun when the meaning is easily understood. Because eldest refers to family relationships, it's not difficult to discern its meanings as a noun. For example:

You can tell that eldest refers to "eldest child" in these sentences. This usage is especially common when a possessive determiner comes before eldest in a sentence (my eldest, your eldest, and so on).

Use Oldest for Anything

Oldest refers to the senior age of any noun, not just people. It's more popular than eldest and feels more familiar to most modern writers. For example:

The eldest person in the room isn't necessarily the oldest. Because the meaning of eldest is "most senior," it can refer to the most experienced person in a group, regardless of age. For example:

What About Elder and Older?

Another difference between eldest and oldest is in their comparative adjective forms, elder and older. Both elder and older refer to the person in a group of two or more with the highest age. For example:

However, only elder can function as a noun that describes a senior citizen. For example:

In addition, only elder can add an -ly to become an adjective that means "an older person." For example:

When you take the words down to their most basic forms, you'll find that only one works as an adjective. Old is a common adjective, while eld is an archaic noun not commonly used in modern English.

Superlative adjectives such as eldest and oldest are an important addition to a well-rounded vocabulary. But understanding their differences can be trickier than it looks! Learn all about commonly misunderstood adjectives with a guide to historic vs. historical.