Elicit vs. Illicit: Revealing the Difference

Do you elicit a response or illicit a response? Is the crime elicit or illicit? While these words may look and sound similar, they have nothing in common. Discover the differences between elicit and illicit, and learn about their meanings and uses. 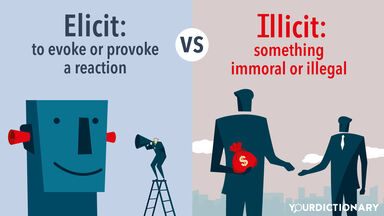 Elicit and Illicit: The Definitions and Differences

While elicit and illicit may look and sound similar, they are neither synonyms nor antonyms. These two words are homophones, which sound the same but have unique spellings, meanings and uses. The subtle difference in sound is that elicit is sometimes pronounced eh-lih-siht and illicit is pronounced ih-lih-siht.

Elicit is a verb that means "to evoke or provoke a reaction." The reaction can be emotional, physical, vocal, or metaphorical. The word elicit comes from the Latin elicere, which means “to draw out by trickery” and is itself derived from lacere, which means "to entice” or “to deceive.” While the origins imply provoking emotions through negative means, the modern definition is simply “to draw forth” something.

How to Use Illicit

Illicit is an adjective that refers to something that is "prohibited by law, custom or societal standards." It comes from the Old French illicite, which means “forbidden” and “unlawful.” This word is itself a derivative of the Latin illicitus, which means “not allowed” or “illegal.”

Tricks to Remember the Correct Spelling

Even when you know the meanings of elicit and illicit, it is still easy to confuse the spellings.