Emigrate vs. Immigrate: A Subtle But Important Difference

The key difference between emigrate and immigrate is whether you are coming or going. The term "to emigrate" means you're leaving your old country to come to a new country. On the other hand, when you immigrate, you’re coming to a new country from the country you were born in. Check out each term with examples to see the whole picture of the difference between emigrate vs. immigrate. 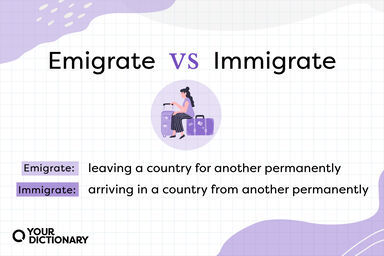 Woman and Suitcases With Emigrate vs immigrate definitions
Advertisement

Emigrate: Away From One Country

Emigrate comes from the Latin emigrare (“to move away”). Its prefix is a variant of ex- (“away”), essentially becoming the opposite of migrate, which simply means “to move.”

Using ‘Emigrate’ in a Sentence

You can use emigrate in a sentence any time you’re talking about a person or people (emigrants) leaving their home country for another. For example:

Immigrate: Into a New Country

Like emigrate, immigrate uses the root word migrate to demonstrate the act of moving. It adds the prefix im- (variant of in-) to show movement “into” something — in this case, a new country.

Using ‘Immigrate’ in a Sentence

Sentences that discuss immigrants moving to another country include:

Tips for Remembering the Difference

If emigrate vs. immigrate vs. migrate still confuses you, there's a sure-fire way to keep them straight: