People who prefer calm, conflict-free lives may worry about what their foes are planning. But for those whom drama tends to find more regularly, deciding whether that annoying neighbor is simply an enemy or a full-blown nemesis is an important matter. There is a difference between enemy and nemesis — and that doesn’t even include frenemy or archnemesis. 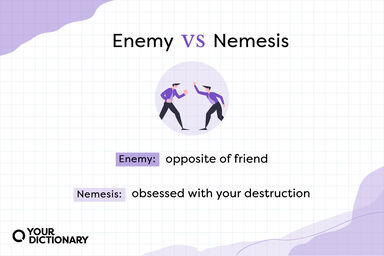 Enemy: Not a Friend

An enemy is the opposite of a friend. They may annoy or bother you (whether by accident or on purpose) but generally, they’re not plotting to destroy you. In the story of your life, they’re a minor antagonist.

Enemy comes from the Latin word inimicus, which translates to “unfriend.” You’ll see this derivation in the Spanish enemigo and French ennemi, opposites of amigo and ami, respectively.

Examples of an Enemy

Enemies can range from minor irritants to hostile nations. Examples of enemies may include:

While you may run into some enemies throughout the day, they’re no comparison to your nemesis. A nemesis is your number one enemy, the person who delights in your troubles and anticipates your downfall. Your bad day is a good day to your nemesis, and truth be told, you feel the same way about them. In fiction, a hero cannot defeat their nemesis.

Examples of a Nemesis

Forget those petty moments with a momentary enemy. A nemesis may be:

Is ‘Archnemesis’ Worse Than ‘Archenemy’?

If nemesis is worse than enemy, where does that leave archenemy vs. archnemesis? Both words use the prefix arch-, meaning “extreme” or “principal.” Your archenemy is your biggest enemy; your archnemesis is your main nemesis. These words for your ultimate foes are interchangeable, though you can also choose archvillain, archrival and archfoe. Choose the one you like best when ranting to your friends or plotting out your next comic (which may or may not be based on your nemesis of a roommate).

Frenemy, a portmanteau of friend and enemy, differs from the traditional meaning of enemy. It can refer to an enemy who you pretend to be friends with, or it can refer friends who often fight. Either way, your frenemy is not quite your friend, but not quite your enemy, either.

Not Just Another Word for Enemy

If you can resolve a conflict with a conversation and a hug, then you’ve just made up with an enemy. For conflict resolution involving a nemesis, it may take a few conversations (and some serious self-reflection) before you get to that hug. And for an archnemesis or archenemy? You may need to wait awhile.