Enquire vs. Inquire: Key Differences and When To Use Each

Inquire and enquire come from the same Latin word, quaere, which means “to ask or seek.” But even though they have similar pronunciations, meanings, and origins, inquire and enquire aren’t always interchangeable. It all depends on where you live — and what information you’re looking for. 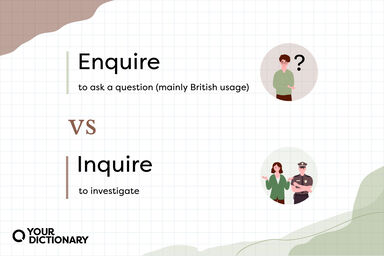 Enquire: To Ask a Question

Primarily used in British English, the word enquire means “to ask an informal question.” It comes from 14th-century Middle English before many words with the prefix en- were changed to in-. Even though American readers may wrinkle their nose at enquire, it’s quite a bit more popular in the United Kingdom than the similar-sounding inquire.

Examples of ‘Enquire’ in a Sentence

Use enquire when you’re asking a general question that doesn’t involve a detailed answer. For example:

Like enquire, the verb inquire seeks information. But the information is typically more detailed and formal than when you’d use enquire. Worldwide, inquire is more common than enquire, making it the preferable choice when writing or speaking about an investigation.

Examples of ‘Inquire’ in a Sentence

Use inquire when you're asking a question that requires a more formal and detailed answer.

Do the same rules apply for the noun forms inquiry and enquiry? Generally, yes — though enquiry is actually more popular than inquiry around the world (except in the United States). Rather than describing the action of seeking information, these terms refer to a particular quest for information. Inquiry and enquiry can name:

The word query, which means “question,” is another term that comes from the Latin quaere. However, the scope of a query is much more limited than an enquiry or inquiry — it’s more of a yes-or-no question than an investigation. For example:

In this case, a query letter results in a “yes” or a “no.” But an inquiry letter is more involved and requires a more detailed explanation.

The differences between enquire and inquire are nuanced enough that a reader isn’t likely to notice them — especially if you’re writing for a British audience. If you’re addressing American readers, it’s probably best to choose inquire and inquiry, no matter the question you’re asking.