When a disease rapidly spreads between populations, would you call it epidemic and endemic? The answer is a bit more complicated than simple vocabulary (and a shared suffix that coincidentally sounds like sick). It depends on the disease itself, where it started, its rate of spread — and whether or not it will ever disappear. 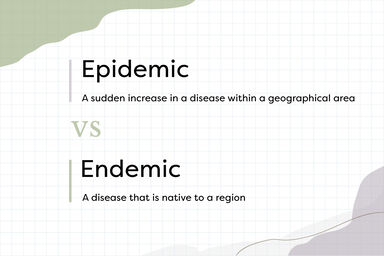 An epidemic is an unexpected increase in disease cases in a short period of time. Derived from the Greek epidēmia, the word epidemic combines the prefix epi- (upon) and the root -demos (the people). When you think of an epidemic, think of a disease descending upon a group of people without warning. It can be a contagious disease (such as smallpox or meningitis), or it can be non-contagious (such as drug addiction or diabetes).

You Can Use It as a Noun or an Adjective

In modern usage, epidemic typically functions as a noun. For example:

You can also use epidemic (or epidemical) as an adjective to describe something with the qualities of an epidemic, such as “Opioid abuse in the United States has begun to reach epidemic proportions.” However, this usage isn’t as common as its noun form.

When a disease is endemic to a region, it’s constant and doesn’t go away. It comes from the Greek endēmios meaning “native” (or “in the people”) and describes a condition that is inherent in that area. Flare-ups of these diseases are known as outbreaks, which describe epidemic-like situations that are clustered in one geographical area. Examples of endemic diseases include malaria, influenza or Lyme disease.

It’s Typically Used as an Adjective

Endemic most commonly functions as an adjective. Occasionally, endemic can be used as a noun (“Malaria is one of several endemics in South Africa”), but it’s not as common.

Examples of endemic as an adjective include:

Many people also misuse the word pandemic in the epidemic vs. endemic debate. Like the other two words, pandemic uses the Greek root -demos, but it adds the prefix pan- (“all”), meaning that a disease affects “all the people.” Put simply, a pandemic is an epidemic whose rate of infection has skyrocketed and has spread through several countries or continents. A recent example of a pandemic was the COVID-19 Pandemic in 2020, which rapidly spread due to air travel and rapid transmission. Once the spread of COVID-19 slows, it will likely become endemic — always present, but fewer outbreaks.

Heal Your Vocabulary With the Right Medical Terminology

It’s important to use the right words, especially when it involves your health. Clear up common misunderstandings in health terminology with: