Equinox vs. Solstice: Definitions and How They’re Different

Changing seasons are marked by changes in weather and temperature, accompanied by longer or shorter amounts of daylight. These transition periods are referred to as equinox and solstice, and they are closely interlinked. 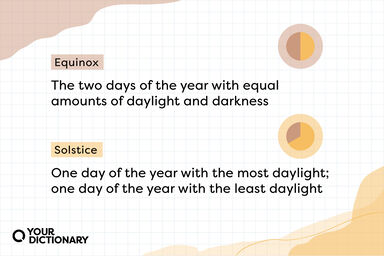 Equinox vs Solstice with definitions
Advertisement

The word equinox is derived from the Latin words aequus (equal) and nox (night).

Equinoxes happen twice a year. The vernal equinox marks the beginning of spring, and it occurs around March 21.

It is also referred to as March Equinox to avoid Northern Hemisphere bias. Remember, seasons are reversed in the Southern Hemisphere, where March 21 would technically mark the beginning of autumn.

The autumnal equinox marks the beginning of autumn, and it occurs around September 22. It is also referred to as the September Equinox.

The word solstice originates from the Latin sol (sun) and sistere (to stand still).

Summer solstice is the longest day of the year, meaning you get the most sunlight and least darkness. On summer solstice, the sun rises earlier and sets later.

This marks the beginning of summer (Labor Day is considered the unofficial end of summer) in the Northern Hemisphere, and it usually occurs around June 21.

Winter solstice is the shortest day of the year and is characterized by a later sunrise and earlier sunset.

This officially marks the beginning of winter in the Northern Hemisphere. It usually occurs around December 22.

Understanding When Each Equinox and Solstice Occur

Our standard Gregorian calendar has about 365 days in a year, but that’s technically wrong. It actually takes about 365.24 days for the Earth to make a full trip around the Sun.

That slight variation causes solstices and equinoxes to gradually drift about 6 hours later each year, which is why they aren’t always on the same day every year. Leap years, which have 366 days, correct that drift and help equinoxes and solstices return to their earlier dates.

The Reasons for the Seasons

You might be wishing for long days of beautiful sun and warm weather all year round, but equinoxes and solstices are here to make sure you experience the full breadth of weather and temporal changes that this world has to offer.