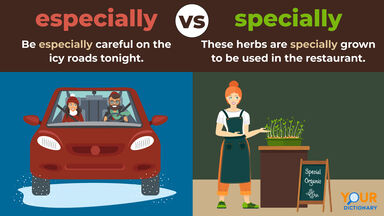 Especially vs. Specially: The Difference Explained

While they are deceptively similar, the words especially and specially have distinct differences.

Both Can Mean 'Particularly'

There are some cases where especially can mean "particularly," as in "this one apart from the others." It relates to its meaning of "above all." These instances include:

There are also some cases in which you can use either especially or specially to indicate a particular item or detail. For example:

In these cases, it's a matter of personal preference. If you're trying to choose between specially and especially to describe something in particular and you're not emphasizing that one option is separate from the other, either word would work.

Especially Means 'Above All'

Examples of especially to mean "above all" include:

If you can replace especially with very or exceptionally, then you're using it correctly in this context. For example, "I'm very grateful for your support this year" only works with especially. Specially does not have a meaning to indicate "above all."

Specially Means 'For a Special Reason'

Notice how you can use specifically in each of these sentences instead of specially. You also can't use especially in any of these cases, as they don't indicate that one choice is above the others.

Origins of Especially and Specially

Especially and specially have the same Latin root, but they took different roads to arrive at different meanings. They both come from the Latin specialis, which means "belonging to a kind or species." Then the word origins differ:

Like most Latin words that begin with "sp", especially gained an "e" when it made its way into Old French. Specially appeared in English long before especially, and was used differently. Even though specially and especially have the same root, they are still used differently to this day.

Now that you know when to use especially or specially, your writing will be especially engaging to your reader! Clear up other misunderstandings with these tips on differentiating between loose vs. lose. Or, if you've never been quite sure how to use pique in a sentence, check out the difference between peek vs. peak vs. pique.