Fair vs. Fare: An Unbiased Breakdown

Does fair or fare mean "beautiful"? What about the money you pay to a bus driver — is that fair or fare? Even though these words sound exactly the same, they're not the same word at all. Learn the different meanings and grammatical functions of fair and fare, and you'll have a fair chance of avoiding grammar mistakes in the future. 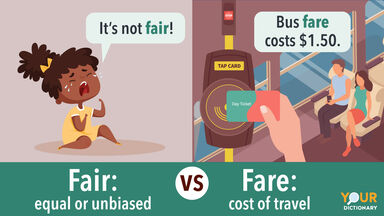 When to Use Fair vs. Fare

Fair and fare are homophones, meaning that they sound similar but are spelled differently. They also have different definitions and uses in a sentence.

Even if you can't remember all the definitions of each word, remember this: only fare is a verb, and only fair is an adjective.

The Many Meanings of Fair

It's a fair bet that you use the word fair quite often in your everyday conversation. But if you had to spell it, would you pick the right one each time?

How to Use Fair as an Adjective

If you're trying to decide between fair and fare to describe something, the answer is always fair. While fair has many adjective meanings, fare has none. You can describe something as fair in the following ways:

How to Use Fair as an Adverb

When fair describes a verb, it's functioning as an adverb to describe an action done without cheating. For verbs such as play or fight, you'd use fair, but with other verbs, you'd say fairly. For example:

Another use of fairly as an adverb is to mean "somewhat" or "reasonably" when modifying an adjective. For example:

How to Use Fair as a Noun

There's only one definition for fair as a noun: "a public event or exposition for entertainment or commerce." You may see it spelled faire in this context, but that's the old-fashioned spelling for the same concept. Examples of fair in a sentence include:

How to Use Fare in a Sentence

As you can see, there are many ways to use fair in a sentence. Fare is less versatile: you can use it as a noun and a verb, but that's all.

Using Fare as a Noun

When you use fare as a noun, you're likely referring to the cost of traveling somewhere. For example:

Fare may also refer to the food or entertainment at a venue. For example:

Using Fare as a Verb

The word fare is synonymous with go or proceed when used as a verb. You may have heard the phrase "fare thee well," or "farewell," which means "go well." Other examples of fare as a verb include:

Language arts may seem unfair at times, especially when two words sound identical but don't have the same meanings. However, the more you learn about these tricky word pairs, the better you'll fare in your writing! Keep the lesson going with a short guide on when to use autumn vs. fall when describing seasons.