Infamous doesn’t mean “extremely famous.” But it doesn’t mean “not famous,” either. Someone who is infamous is still quite famous — but unlike your favorite celebrity or social media influencer, you wouldn’t be excited to run into them on the street. 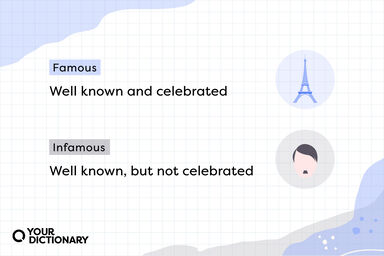 Famous comes from the Latin famosus, meaning “celebrated.” It’s derived from fama, Latin for “reputation,” and has a positive connotation when you use it to describe a noun that is very well known. People can be famous, but so can places or things. The Eiffel Tower is a famous landmark in Paris, for example, and Oscar Mayer is a famous brand of lunch meat. And who doesn’t like the Eiffel Tower or bologna?

Examples of ‘Famous’ in a Sentence

Open any celebrity magazine and you’ll find examples of the word famous everywhere. But famous things don’t have to be known by everyone. For example:

Even if you don’t subscribe to celebrity magazines or click on every celebrity gossip link, you probably know these famous, celebrated people in history:

The difference between famous vs. infamous lies in one little prefix: in-, meaning “not.” But it doesn’t mean that an infamous person is “not famous” — it means they’re “not celebrated.” Infamous is the adjective form of the word infamy, both of which come from the Latin infamis (meaning “of ill fame”). It used to be a legal term that meant one lost rights as a citizen due to being convicted of a crime, but today, it means “generally accepted to be a bad person.” Any confusion is understandable; even the Three Amigos got it wrong:

Examples of ‘Infamous’ in a Sentence

Due to its negative connotation, you’re most likely to use infamous to describe a person or world event (or maybe a very bad dog). For example:

Infamous People You May Know

Unfortunately, history is full of infamous figures, particularly world leaders who oversaw murders, torture and genocide. You probably know these names (but wish you didn’t):

Be Famous For Your Word Choice

Once you’ve mastered the in- in infamous, it’s easy to tell the difference between these words. But there are more confusing words to maneuver, including: