Fiancé vs. Fiancée: Does the Extra 'E' Make a Difference?

You're ready to post your engagement on social media, but can't decide whether to use fiancé or fiancée. Both describe a person who is engaged to be married, and traditionally, they referred to different people (a man and a woman). But while the difference is less prominent today, knowing the difference between fiancé and fiancée can make your announcement even more perfect — especially to your French followers. 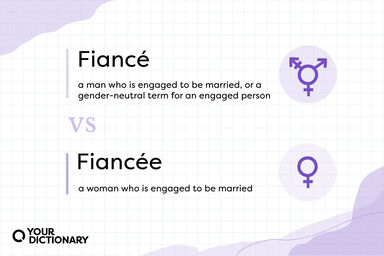 Fiancé vs fiancée With Gender Icons and Definitions
Advertisement

How Do You Spell ‘Fiancé’?

It may seem like fiancée is an incorrect spelling of fiancé, but that’s not the case. Fiancée and fiancé are both real words that are pronounced the same way (fee-ON-say in English, fee-on-SAY in French). They are also both spelled with an acute accent over the "e," indicating the /ay/ sound at the end of the word.

But the differences in their meanings and usage go beyond that extra "e.” They mean:

Fiancé and fiancée come from French, which assigns masculine and feminine forms to its nouns. However, as English becomes more of a gender-neutral language, many people choose to use fiancé for any person to avoid gender-specific terms.

Origins of Fiancé and Fiancée

The origins of both fiancé and fiancée begin in the Latin fidere, which means "to trust." It changed to fiance ("promise") in Old French, then the verb fiancer, meaning "to become engaged to be married" or "to betroth" in modern French.

Both fiancé and fiancée appeared in the mid-18th century to describe a person who has become engaged. Today, fiancé is much more popular than fiancée.

Examples of Fiancé and Fiancée in Sentences

Those who enjoy the traditional aspects of weddings may prefer using the binary male and female gender assignments of fiancé and fiancée. Some examples include:

Other Ways to Describe Your Fiancé

Both fiancé and fiancée are beautiful ways to describe the person with whom you intend to spend the rest of your life. But they’re not the only ways to refer to your betrothed,

Words such as partner, spouse-to-be and intended have also become popular in the last few decades. You can also use the classic wedding word affianced, which means “to become engaged,” if you’d like to avoid the whole fiancé vs. fiancée debate altogether.