The saying goes, “If wishes were fishes, we’d all swim in riches.” Hard to say what that actually means, but one of the biggest sticking points of that saying is fishes. Should it actually be fish? Surprisingly, it’s both, but it depends on what you’re referring to. 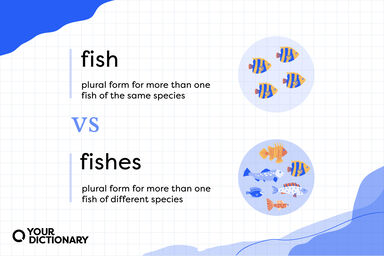 "Fish" meaning in its plural form and "fishes" meaning as detailed in article.
Advertisement

For most nouns ending in -sh, you would add -es at the end to make it plural.

That’s where part of the confusion comes with fishes, especially when you consider words like dishes and wishes.

Despite being a noun that ends in -sh, fish follows the confusing rule of animals whose plurals are the same as their singulars, which includes:

“Fishes” or “Fish”: Which Is Correct?

Fish is indeed the more common plural of fish, so when you see more than one goldfish in a tank, you can say, “Look at all those fish.”

Fishes is less common and typically reserved for specialized uses. Researchers and scientists tend to use fishes when referencing more than one type or species of fish. So, if you had a tank full of goldfish and catfish, you’d say, “Look at all those fishes.”

Thankfully, if you use fishes as a general plural form of fish, the average person probably won’t care and will still understand that you are referring to more than one fish, regardless of how many species are involved. However, for more formal writing, it’s worth understanding the difference.

Think of fish and fishes like the difference between people and peoples. People is the general plural word for more than one person. Peoples is a word that refers to diverse ethnic groups, races, or cultures within a given geographical area.

“Fishes” or “Fish” As Verbs

Fish and fishes also act as verbs. Fish is the verb referring to the act of catching fish, while fishes is the third-person simple present version of the verb.

Just like with the word buffalo, you can create a whole sentence with just the word fish repeated eight times. That’s because fish acts as a noun (the water animal), a transitive verb (to catch fish), and a place name (the small town of Fish, Georgia).

What Is a Group of Fish Called?

Most people call a group of fish a school, which can be a little confusing. Fish aren’t known to read textbooks or be particularly good at tests, but the word school actually comes from the Dutch word schōle, meaning a troop or band.

This is also where you get the word shoal, which is another word for a group of fish. You’re forgiven for getting confused with this one because, in geography and oceanography, shoal also refers to a sandbar in a body of water or a generally shallow area in a body of water.

A Pod of Fish?

You may also hear the word pod referring to a large group of marine creatures. While most people will get that you’re referring to a group of fish when you say “a pod of fish,” pod should mostly be reserved for marine mammals, like dolphins and whales. That’s just its porpoise.

Some animals, like octopuses, don’t have an official group name, while herd seems to work for everything from baby cows to elephants.

“Fishes” in Sayings and Idioms

Outside of research and “specialty” sayings, fishes is one of those words that seems to end up in a lot of classic sayings and idioms. This is just further proof that you can and should use it as you please.

If Wishes Were Fishes

There are a few different variations to the end of this one. If wishes were fishes:

These are all apparently variations on a Scottish nursery rhyme. They essentially hint at the idea that you shouldn’t spend your days only passively pining; it takes action to fulfill certain wishes.

Sleeping with the Fishes

This is one of the iconic lines from the movie The Godfather, implying the threat of getting dumped in the ocean to drown.

Plenty of Fish in the Sea

If you’ve ever been through a breakup or a bit of heartache, you have absolutely heard this phrase. It implies that there are plenty of other people and opportunities to fall in love. This doesn’t use fishes, but considering all the types of people out there, maybe it should be “plenty of fishes in the sea.”