Flair vs. Flare: The Stark Contrast

Do you write with flair or with flare? These commonly confused words may sound the same, but their meanings are quite different. So which is which? Avoid an easy grammar error with a helpful guide to flair vs. flare. 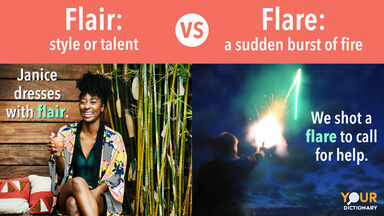 It's easy to mistake flair for flare, and vice versa. But their meanings and parts of speech are quite different.

Flair functions as a noun that describes a person's special ability, talent or style. Because flair can refer to any type of talent, it's usually followed by the preposition for and the talent it's describing. You can also use it on its own ("My sister signs her name with flair" means that she signs her name with style).

How to Use Flair as the Object of a Sentence

The most common usage of flair is as the direct object to the linking verb have. For example:

How to Use Flair as the Subject of a Sentence

You can also use flair as the subject of a sentence when it's performing the action. For example:

How to Correctly Use Flare

Unlike flair, the word flare refers to several different meanings, all of which have to do with a sudden change. For example, when you say "Mark's temper flared," you're indicating that Mark suddenly became angry. The definitions of flare include a sudden burst of fire, a rapid onset of disease or pain, or a shape that widens at the end.

Flare Meaning: A Burst of Fire or Light

Flare often refers to a sudden burst of fire or light. For example, the phrase flare gun describes a pistol designed to send a fiery flare into the sky as a signal of distress.

You can use flare as a noun or a verb in this context. For example:

Flare Meaning: The Widening of a Shape

If you've ever owned flared jeans, you know that flare can indicate a shape that is straight on one side and bell-shaped on the other. This sudden widening can be a noun, a verb or even an adjective (as in "flared jeans"). For example:

Flare Up Meaning: A Rapid Onset of Pain or Disease

Like flare, you can use flare up as a noun or a verb. For example:

How To Choose the Right Word

So how do you pick the right word in your writing? Use some quick tips for telling the difference between flair and flare.

Some writers get so confused between flair and flare that they resort to flaire, which is not a word at all. While you might see it as a cute shop name or a fun style app, it's not the correct replacement for flair or flare.

The basic rule is: use flair when talking about style, use flare in every other situation, and never use flaire at all.

Showcase Your Flair For Writing

Your unique voice and perspective already make you a worthwhile writer. Once you clear up common grammar errors such as flair vs. flare, you'll really be able to show off your flair for writing! Learn more about commonly confused word pairs with a short lesson on fair vs. fare.