Flammable vs. Inflammable: Do They Mean the Same Thing?

Some people may try to tell you that grammar doesn’t matter. Language arts students, avid texters, anyone with a social media account — they may claim that their grammar is good enough to get by. But when it comes to a word pair like flammable vs. inflammable, you want your grammar knowledge to be better than “good enough,” or it might all go up in flames. 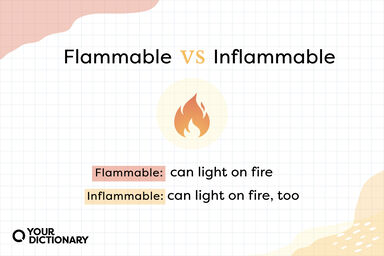 Both Flammable and Inflammable Mean ‘Will Easily Start a Fire’

At first glance, flammable and inflammable look like antonyms. After all, the prefix -in often means “not,” as with inflexible (not flexible) and independent (not dependent). But in the case of inflammable the prefix in- means “to cause to.”

When you combine the Latin inflammare ("to be able to set on fire") with the suffix -able (“capable of”) the word inflammable looks a little redundant, as its prefix and its suffix mean the same thing. That's why people assume in means "not."

Flammable (and inflammable) substances include:

So Why Do We Have Both Words?

Inflammable appeared in English usage in the 17th century, but its confusing affixes led to the shortened version, flammable (from the Latin flammare), in the early 19th century. Flammable looks a lot more like “can cause a fire,” making inflammable look like a word that means “not able to cause a fire.” Because more people consider flammable to indicate possible danger, companies use it more than inflammable on their safety warnings and manuals. However, if you see inflammable in your daily life, treat it exactly as you would the word flammable.

You’ve got the grammar part down, but now another question arises: Where does combustible come in? Unlike inflammable, combustible is not interchangeable with flammable. It comes from the Latin combustus, which means “to burn up” — a similar definition to flammare. However, we use flammable and combustible in different ways:

Understanding the difference between flammable vs. inflammable may put your grammar skills to the test, but that’s better than your firefighting skills. For more seemingly-insignificant-but actually-important word differences, check out: