Former vs. Latter: Follow These Tips to Use Them Correctly

When writing former vs. latter in a sentence, it can be easy to hesitate or get confused. Thankfully, the difference between them is pretty simple to understand and remember. Explore the meanings and uses of former and latter. 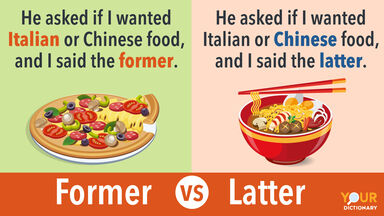 The Difference Between Former and Latter

The meanings of former and latter are pretty straightforward. If you are making a comparison between two things, former comes first and latter is second. The terms can also be used separately to convey the following:

Examples and Usage of Former

The adjective former is defined as “coming before” or “in the past.” Former is often synonymous with previous, as seen in these examples:

How to Remember When to Use Former

You can remember the meaning of former by recalling that it means "first," and both words begin with an “f.”

He attended his former school first, and then he started attending his current one.

Examples and Usage of Latter

The term latter means “the second of two” and is used in comparisons of two things. Latter originally comes from the Old English lætra which means “late.” It can also refer to the last thing in a sequence, the end of something or a subsequent period.

How to Remember When to Use Latter

You can remember the meaning of latter by thinking of later, which comes after something. Later and latter both begin with the letter “l.”

How to Use Former and Latter

Other Ways to Use Former and Latter

While former and latter are typically used to make a comparison between two things, they can be applied to larger comparisons.

How to Remember the Correct Word

Now that you have a good understanding of former vs. latter, you may have questions about other commonly confused terms. For example, when should you use this vs. that or these vs. those? What about the difference between who, that and which when you’re talking about something or someone? Should you write vs. or vs? Explore all this and more, and before you know it you’ll be a master of the English language.