Meaning of “Friendsgiving” vs. “Thanksgiving”: What’s the Difference?

Thanksgiving is one of those beautiful holidays where the food really is the star of the show. Turkey, gravy, stuffing, mashed potatoes, Brussels sprouts, pies of various fillings and formations. Friendsgiving takes all that and asks, “What if you had some lovely friends to help you eat all that food?” 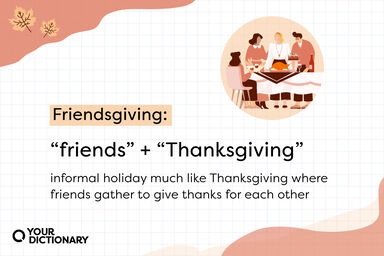 definition of the portmanteau word "Friendsgiving" from the article
Advertisement

What Does "Friendsgiving" Mean?

In reality, Friendsgiving is a combination of friends (y’know, those people you share all those inside jokes with) and Thanksgiving. Friendsgiving is simply the same as Thanksgiving, but with your friends instead of family. This makes it a portmanteau holiday on par with Movember and Chrismukkah.

The Origin of Friendsgiving

While it might not be new in concept, Friendsgiving is a fairly recent word in the English language. There’s no exact record of when it entered the cultural hivemind. While many people assume it came from popular TV sitcom Friends, not a Ross, Chandler, or Phoebe ever mentions Friendsgiving.

In terms of search, a handful of people were looking up Friendsgiving as far back as 2004, but the holiday reached its peak search volume around November 2019.

How To Use “Friendsgiving”

Even though Friendsgiving is a bit of an informal holiday, you should still capitalize the “F” when you write it down. Friendsgiving Day isn’t a particularly common phrase, considering there isn’t an official day for Friendsgiving.

Considering it’s not an official holiday, there aren’t any real rules about when to hold your Friendsgiving celebration. Playing things fast and loose is part of the spirit of the holiday, really.

What Does “Thanksgiving” Mean?

In the United States, Thanksgiving is a holiday celebrated in the fourth week of November every year. The word itself is a simple joining of thanks and giving. While you might know Thanksgiving primarily as a reference to Thanksgiving Day, the word also exists in a lowercase form (thanksgiving) as a noun that means “the act of giving thanks or expressing gratitude.”

The Origin of Thanksgiving

In November 1621, after treacherous journeys and brutal winters, the Pilgrims celebrated their first successful corn harvest with a feast. They invited the Natives who helped them survive, and the merriment lasted three whole days.

How To Use “Thanksgiving”