Gage vs Gauge: Determining the Difference

You’ve probably heard the term gauge, but thought it was spelled gage. However, gage is an entirely separate (and somewhat obscure) word that, while rare, can still be found from time to time. Discover the differences between these two words and which spelling to use. 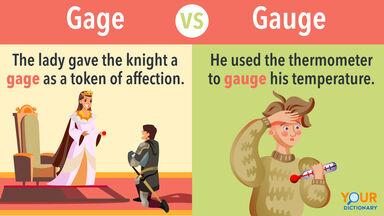 How to Gauge the Difference

Although gauge and gage are two separate words, they are often used interchangeably to refer to the more common meaning of “a measurement or instrument.” However, gauge is by far the preferred spelling for this meaning. The confusion between gauge and gage typically stems from the fact that their pronunciations are the same.

Examples of Gage in a Sentence

While the word gage may be obsolete, you might still encounter it in older writings. It typically refers to a token, but can also mean something for security or insurance. In Shakespearean times, it could also mean a challenge. Additionally, the gage spelling is sometimes used to mean gauge, though in this context gauge is widely agreed to be the correct spelling.

How to Use Gauge in Context

Gauge comes from an Old French word jauge or gauger meaning “to standardize or calibrate.” A gauge is a device used to measure the pressure of liquids or gases. It is also used as a verb meaning “to measure or determine something.” Gauge is widely agreed to be the correct spelling for this meaning.

Learning the Differences Between Words

Sometimes words look and sound very similar but have different meanings. For instance, look at peek, peak and pique. Other words like toward and towards have slightly different spellings but the same meaning.