The Difference Between Syntax and Grammar Made Easy

Many people believe that grammar and syntax are the same concepts. While they both dictate the construction of a sentence, it is more accurate to say that syntax is a part of grammar. Read on to learn the key elements of both grammar and syntax, and how to tell the difference between the two. 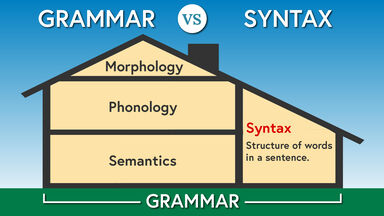 Imagine that you’re building a house. Construction has many rules, including building guidelines, safety requirements, and adherence to blueprints. One of those rules dictates how workers must build the frame of the house in order for it to stay upright. While the structure is a fundamentally important part of the house, it is not the only part of the construction process.

Like the construction of a home, building a sentence has many rules. This whole collection of rules is known as grammar. Creating the structural frame of the sentence, like building the frame of the house, is known as syntax. It’s important, but ultimately, the syntax is just one part of a sentence’s grammar.

Grammar is the set of rules a language uses to convey meaning. It is one of the fundamental building blocks of language, along with lexicon, or vocabulary. When you use proper grammar, you are following the generally accepted rules of your language.

Elements of grammar include:

Grammar dictates the ways you use words, especially parts of speech. For example, nouns and verbs must agree with each other in your sentence. But, the order of words in that sentence relies on its syntax.

The Greek word syntax means “arrange together.” Syntax has more to do with linguistics than language. Because syntax is a part of grammar, all syntactical rules are also grammar rules. Here are some elements of syntax:

Grammar rules and patterns dictate the ways you use the syntactical parts of a sentence. For example, every sentence must include a subject and a predicate. While there are basic syntactic rules to follow, syntax makes it possible for writers to establish tone by varying the types of sentences in their writing.

Examples of Grammar and Syntax

Tom went to the store.

After winning the game, Charlotte and her friends celebrated in the locker room.

Note that in the second example, you can change the order of the clauses to:

Charlotte and her friends celebrated in the locker room after winning the game.

The sentence still follows grammar and syntax rules. It makes sense and conveys the same meaning as the original example. But, syntax allows you to be more creative with your sentence style with a range of structures.

If you’d like to learn more about how grammar and syntax affect grammar, check out more English language arts resources. You can find examples of syntax patterns in literature to see how authors take advantage of sentence structure. Or, take a look at the 11 rules of grammar to make sure your writing is completely error-free.