You’ve likely seen and used the word guarantee at some point, but have you ever seen it spelled guaranty? More specifically, is this a misspelling, an alternate spelling or a different word altogether? Discover all this plus how to use guaranty and guarantee in a sentence. 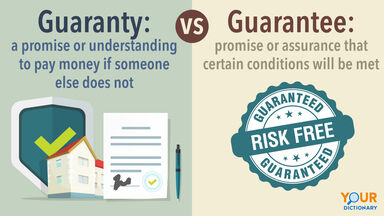 Guaranty or Guarantee: What's the Difference?

Guaranty and guarantee are two distinct words, although their meanings do overlap.

The Difference Is in the Definition

To remember the difference between the two words, recall that guarantee ends in two e’s which you can apply to everyone everywhere. In contrast, guaranty ends in “y” which can be between you and another party.

How and When to Use Guaranty

Guaranty is a noun defined as "a warrant or pledge that a financial obligation will be fulfilled by one party if another party fails to fulfill or pay an agreed-upon amount."

Meaning and Usage of Guarantee

Guarantee as a Noun

In its noun form, a guarantee is "a promise or agreement that something will be done or that something is real." This is usually made in writing, but it can also be a vocal vow from one person to another.

Guarantee as a Verb

As a verb, guarantee means "the act of making a promise."

In cases like guaranty and guarantee, the end of the words makes the difference in both the spelling and the meaning. Other words where the different endings change the meaning include normalcy and normality or historic and historical.