“All Hallows' Eve” vs. “Halloween”: What’s the Difference?

You see ghosts, ghouls, zombies, vampires, glowing pumpkins, and bowls of candy at every establishment. You know Halloween is right around the corner, and it’s time for fun scares, gentle mischief, and cavities for your dentist to worry about in a few months. But why do some people refer to this spooky holiday as All Hallows’ Eve? And what in the sam hill is a hallow? 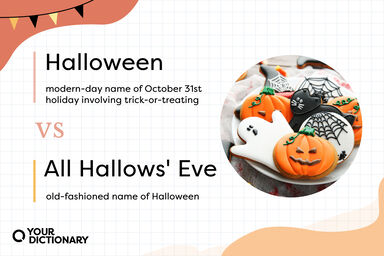 Definition of Halloween and All Hallows' Even that are detailed later in the article.
Advertisement

What Does “Halloween” Mean?

Occurring on October 31 every year, Halloween (pronounced “hal-uh-WEEN”) is a holiday that usually includes wearing a costume, trick-or-treating, bobbing for apples, watching scary movies, and otherwise enjoying the scary merriment (scary-ment?) of the autumn season.

The origins of Halloween were far more sacred and go as far back as 2,500 years ago with the Pagan festival Samhain (pronounced “saw-win”). Samhain comes from Old Irish samain, which meant “summer’s end.” The festival marked the transition from the harvest season to the beginning of winter and lasted from October 31 to November 1.

Where We Get the Word “Halloween”

On old Pagan and Celtic calendars, November 1 was the beginning of the new year and was traditionally considered a holy day. Christians eventually adopted that idea, and in the eighth century, Pope Gregory III proclaimed November 1 a day for honoring all saints and martyrs: All Saints’ Day, which was also known as All Hallows’ Day.

The word Halloween was initially written as Hallow E’en or Hallow-e’en, which meant Holy Eve. In other words, it was the eve of a holy day.

The -een in Halloween is actually a squished together form of e’en, which is a contracted form of even. Even is an old-timey shortened form of evening.

How Is Halloween Celebrated?

While the initial roots of Halloween were a bit more somber, today the holiday is marked by a bit of mischievous fun. Trick-or-treating is the main form of celebration for younger kids. Dressing in costume among all ages is the norm.

Other traditions include carving jack-o'-lanterns, watching scary movies, and hosting or going to parties.

What Does “All Hallows’ Eve” Mean?

All Hallows’ Eve is synonymous and basically interchangeable with Halloween. Both occur on October 31, and they both generally mean the same thing (the eve before All Hallows’ Day or All Saints’ Day). All Hallows’ Eve just happens to be a bit more outdated than Halloween, so you might get some odd stares if you refer to the holiday of costumes and jack-o’-lanterns as All Hallows’ Eve.

Part of that might come from the word hallow (pronounced HAL-loh). As a noun, hallow means "saint" or "holy person." Outside of its roots in Halloween and All Hallows’ Eve, hallow is a largely obsolete word (unless you're a Harry Potter fan), so it’s okay if you didn’t know or don’t use it in your everyday conversations.

Where Does the Apostrophe Go in “All Hallows’ Eve”?

Technically, those spellings aren't wrong per se, but the grammatically correct form is All Hallows’ Eve. To make things simpler, replace Hallows’ with Saints’. The apostrophe after the “S” shows that it’s a plural possessive, meaning it’s the eve of the day belonging to all the saints.

How Is All Hallows’ Eve Celebrated?

In the olden days, All Hallows’ Eve was traditionally a Christian holiday and involved church mass and vigils. These days, there isn’t much difference between All Hallows’ Eve and Halloween in terms of celebrations.

Other Holidays Related to Halloween and All Hallows’ Eve

Halloween and All Hallows’ Eve are by no means the only holidays related to the dead. Historically, cultures from all over the world have had holidays and festivals centering on the relationship between the living and the dead.

Translating to “Day of the Dead,” Día de los Muertos is a holiday originating from Mexico that is usually celebrated on November 1 to November 2, though some people may celebrate it beginning October 31.

During Día de los Muertos, it's said that the dead return to the land of the living, but not in the scary way that you might be thinking. The holiday is a celebration of family members who have passed and those who are still with us. Think of it more as a family reunion, but with your whole ancestral family, past and present.

Obon, or sometimes O-Bon or just Bon, is a traditional holiday celebrated in Japan. Similar to Día de los Muertos and the more somber roots of Halloween, Obon is believed to be a time when the spirits of ancestors temporarily return to the living plane to visit relatives. Usually observed from August 13 to 16, Obon is celebrated with dances, visiting family graves, and offerings to home altars.

A holiday practiced in Somerset on the last Thursday of October, Punkie Night (sometimes Punky Night) involves children parading the streets of their village while holding punkies.

What in the world is a punkie? It’s much like what we know as the jack-o’-lantern, but replace the pumpkin with a root vegetable called a mangel-wurzel. The word punkie likely comes as a cutified variant of pumpkin.

What Is the Night Before Halloween Called?

For some people, October 30 holds as much (if not more) importance than actual Halloween night. The night before Halloween is often more associated with pranks, shenanigans, and tomfoolery, but it has a different name depending on where you grew up.

Devil’s Night primarily occurred in Detroit, Michigan. That’s right, it’s in the past tense now. Although it was largely harmless from the 1940s to the 1970s, by the early 1980s, Devil’s Night took a darker, more dangerous turn with heavy arson. On Devil’s Night in 1984, the Detroit Fire Department reported over 800 fires across the city.

The good news is it eventually gave way to Angels’ Night, a volunteer operation that acted as a neighborhood watch to curb all that arson.

Cabbage Night is celebrated everywhere from rural Niagara Falls, Ontario, to Upstate New York to northern regions of New Jersey. Rumors suggest that the night came about from old Scottish traditions where girls pulled up their neighbors’ cabbages to try to get some info on their future husbands. The deed done, they’d then throw the vegetables at the neighbors’ doors and run.

Other areas of the Northeastern United States refer to Mischief Night as Gate Night. The idea here is that Halloween is the night when the Gates of Hell open up. The general idea is the same though: pranks, mischief, and eggs.