Has vs. Have: Proper Grammar Rules

It’s important to know how to use the verb to have correctly. But what is the difference between have and has? Read on to find sentences with has and have, as well as to learn the grammar rules that dictate when you should use them. 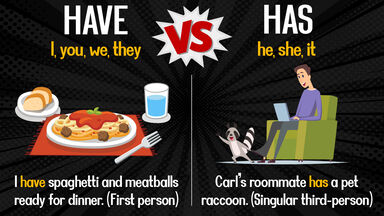 Have vs Has Example
Advertisement

Present Tense Uses of Have and Has

Both words are present tense forms of the verb to have. The past-tense form is had, and the present progressive tense (or continuous tense) is having. The correct verb conjugation depends on the sentence’s point of view.

First-person, second-person, and plural third-person conjugations that use the pronouns I, you, we, and they require the writer to use have. The same rule applies when a noun or name replaces the pronoun.

One meaning of to have is “to possess or hold something.” There are several ways to use have and has to indicate that a person or noun is in possession of something. Some examples include:

Singular third-person conjugations use has. These pronouns include he, she, and it. Here are some examples of sentences that use has:

Have and Has as Modal Verbs

When have to or has to shares meaning with must in a sentence, they’re used as modal verbs to express mood. This usage influences the subject and compels them to action in a present tense sentence. The grammar rules for various conjugations are the same as above. For example:

These examples are usually intuitive to English speakers. Using the wrong form of to have doesn’t sound right, making it easy to identity. However, using proper subject-verb agreement doesn’t stop in the present tense.

Also known as helping or linking verbs, auxiliary verbs join with active verbs to create a verb phrase. When have and has connect with past participles, they form the present perfect verb tense. Present perfect describes an ongoing situation that has occurred in the past and in the present.

Here are some ways to establish the present perfect tense for I, you, we, and they conjugations with have.

When the sentences contain a singular third-person perspective, use has. For example:

Contractions of Has and Have

The grammar rules of using has and have are the same when using their contractions. These shortened words are effective ways to make your conversational tone more casual or efficient.

American English reserves most of its have-related contractions for the present perfect tense. The point of view of the sentence, as well as the verb tense, indicates which contraction you should use. Here are some examples of contractions that use the word have.

Note that the ending -’ve is consistent when the noun is first, second, or singular third person. The rule is the same even when modal verbs like should, would, could, and might are present.

Has is not as versatile as other forms when it comes to contractions. Check out additional examples of ways to use has in a contraction for plural third person nouns in present perfect tense.

Has works in present perfect tense as well as have. However, when combined with modal verbs, even third-person nouns and pronouns shift to forms of have. Examples include:

Modal verbs change more than just the mood of these sentences. They are some of the only instances in which you use have in a singular third-person conjugation.

British English extends phrasing to has got or have got. This form isn’t as common in American descriptions of possession, which tends to stick to the contraction form.

Now that you know all about the uses of have and has, take a look at more grammar articles that clear up more confusion. You can learn about using much versus many when describing quantities, or when to use can or may to ask permission. Once you know the rules, grammar can be a lot of fun!