He vs. Him Grammar Rules Simplified

Having a hard time deciding whether to use he or him? Knowing which pronoun to use isn’t as hard as you think once you break down the grammar rules. After you learn the difference, you'll never question how he or him should be used in a sentence again. 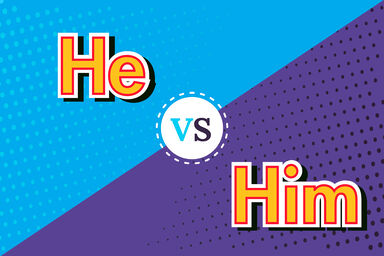 he vs him
Advertisement

Difference Between He and Him

Is it “he went” or “him went”? There is only one clear winner. To learn who that winner is, you need to first understand pronouns. Pronouns are used to replace nouns to give sentences a little variety and to avoid unnecessary repetition. They are like adding a new ingredient to your sundae: they spice it up. It would be boring if Tim always did everything all the time. Rather than Tim, you could say he did something.

To make it even more complicated, pronouns come in different forms. For today, you’ll just focus on the male third-person pronouns “he” and “him.”

When to Choose He

In the world of grammar, he is a singular third-person male pronoun. He is used to replace the male subject of the sentence: it functions as a subject pronoun. This might sound confusing, but it is actually quite simple. Consider these example sentences:

The pronoun he takes the place of the second subject to avoid repetitive sentences like, “Tommy doesn’t lie, so Tommy must be right.”

Use of He for Unknown

There are times when you don’t know if a dog, cat, gerbil, or baby is male or female. In these instances, a person might use he as a generic term. For example, if the police don’t know the gender of a criminal and they can’t avoid using a singular pronoun, they might say:

You don’t need to worry; he will be caught.

While the police don’t know if the person is a male, they’re using he as a generic term. However, given the changing times of grammar and gender inclusiveness, it is always best to try to rewrite a sentence to avoid using the generic he if possible.

Using they as a gender neutral singular pronoun is becoming more common as well. In the case of non-human subjects, it can also be appropriate. For example, "I like that cat, because it is friendly."

Using Him in Sentences

Where there is a he, there is a him. Much like he, him is also a third-person masculine pronoun. However, him is an object pronoun for the subject pronoun he. Sound confusing? Don't worry, it will get clearer.

An object pronoun is not the subject of the sentence, but instead it is in some way affected by the subject either directly or indirectly. The object receives the action of the verb. It is also used after a preposition. See how the object pronoun him works in this sentence:

In this sentence, Cameron is the subject, saw is the verb and him is the singular object pronoun. Look at a few more examples.

Him can also be used after a preposition in a sentence. For example:

That wasn’t as hard as you thought. Now, it is time to add a little more difficulty by exploring how he and him are used with and.

Choosing He or Him With And

One of the most confusing areas of pronoun usage is with and. Even advanced English users can still have an issue when it comes to who goes first with and. A fun memory trick is to "let your friends go first." Therefore, him and he will come before me or I.

When to Use He or Him

Now that you’ve read all the rules, you definitely know that “he went” is correct and not "him went." To round out your education, you might want to explore she vs. her examples. It’s important to learn all sides when it comes to pronouns.