When describing something that took place in the past, should you use historic or historical? The answer depends on what you are describing. That's why choosing between historic vs. historical can be a difficult decision if you're not clear on the difference between these words. Use this information to help you select the correct term. 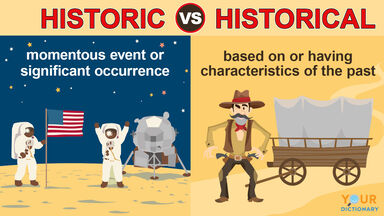 When to Use Historic vs. Historical

The key to knowing when to use historic or historical is to consider the overall impact of the event, occasion or object you are describing.

Keep these key grammar tips in mind when using the words historic or historical in your writing or spoken communication.

The sample sentences below correctly feature the word historic. Each one is describing something that represents a momentous or significant event or accomplishment.

The following situations are ones where the word historical is appropriate. Each sentence refers to something that took place in the past, but that would not be described as a historic (momentous) occasion.

Many words in the English language look similar when written and/or sound almost the same when spoken, yet don't mean the same thing. Now that you know how to differentiate historical vs. historic, continue building your language using skills by learning how to properly use even more commonly confused words. Use these commonly confused words worksheets to practice what you learn and test your ability to differentiate between these terms. From there, explore some historical terms like fascism vs. communism vs. socialism.