There’s a big difference between a hoard of cats and a horde of cats. One is a houseful of sleeping, adorable kitties — and one is a stampede of angry, pillaging (and yet still adorable) felines. It’s easy to mix up hoard and horde, but just like every one of those smooshy cat faces you know and love, they’re totally different. 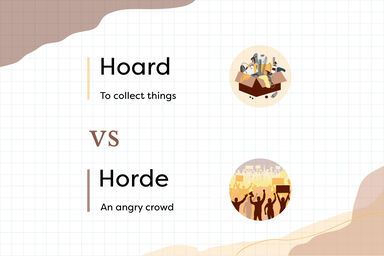 The word hoard comes from the Old English hord, meaning “hidden treasure.” The Old English verb form hordian describes “amassing valuable items for future use” — a word that aligns nicely with our modern use of hoard.

Hoard also relates to hoarding disorder, a mental health condition in which people feel the compulsion to save items, regardless of their monetary value. It can be detrimental to a hoarder’s physical health as well as their psychological health, as they may accumulate so many items (or unclean items) that it impacts their living area.

‘Hoard’ Is Usually a Verb

Typically, you’ll see hoard used as a verb, though it does sometimes function as a noun. For example:

If you don’t want to use hoard, try out these words instead:

Horde is a homophone with hoard, but it has a completely different origin. It comes from the Turkish ordu and Polish horda, meaning “camp of nomadic troops,” and describes an uncivilized mob or army that travels together to rob or destroy villages. Today, it refers to a large group of people, though its connotation is still negative (though less pillaging is involved).

‘Horde’ Is Usually a Noun

Unlike hoard, the word horde usually functions as a noun, with a secondary usage as a verb (“to become a horde”). For example:

Want to describe an enraged mob but horde is a little harsh for you? Try out:

You may not want to hoard cats, lest they become a horde — but there’s nothing wrong with hoarding some strong vocabulary. Next, check out: