Home In vs. Hone In: Which One Is Right?

Are you homing in to a great idea, or are you honing in to it? Grammarians often have strong feelings about which phrase to use. Only one is correct — but you may be more likely to hear the other one in everyday conversation. 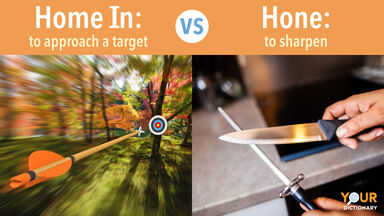 Should You Say Home In or Hone In?

Of these two phrases, only home in is correct. If that surprises you, take a look at the meanings of the verbs home and hone to determine which one makes more sense.

You Home In On a Target

The word home comes from the Old English word ham, meaning "dwelling place." It was a noun describing the place you live long before it was used as a verb meaning "to return home."

Home in is a phrasal verb that means "approaching a destination." When you home in on something, you're returning to your home. Figuratively, it means "to direct all of your attention" to one part of an idea.

Examples of sentences using home in include:

Notice that home in is usually followed by a prepositional phrase that begins with the word on. The phrase specifies what the subject of the sentence is approaching.

Home In Means Zero In

Another phrasal verb, zero in, has a similar meaning to home in. It comes from military terminology to refer to aiming a weapon or concentrating firepower on a target. For example:

Outside of the military context, zero in and home in have close enough meanings to be nearly synonymous in everyday conversation. You can home in on a great idea or the perfect parking space, and you can zero in on them as well.

You Hone a Skill

You only say hone in a sentence, not hone in. Hone in is an example of an eggcorn — a faulty phrase that sounds right, but isn't. More people tend to say hone in because both hone and in have the letter "n," making hone in easier to say. However, it's still incorrect.

The verb hone sounds like stone — and that's not a coincidence! It comes from the Old English word han ("stone") and refers to the stone with which you would sharpen a knife or sword. Today, hone can refer to literally sharpening an object, or it can refer to figuratively sharpening a skill. For example:

Hone is a transitive verb, meaning that it's followed by a noun functioning as a direct object (usually a type of skill). You can't hone in something; you can only hone it.

Hone Your Word Choice — And Your Grammar

Once you've learned the difference between confusing word pairs such as home in vs. hone in, you'll be able to make your point more clearly. But using these types of phrases raises an important grammar question: should it be home in to or home into? Learn when to use in to vs. into with an easy-to-follow grammar guide.