Homonym vs. Homophone: How to Remember the Difference

The words eight and ate are homophones. Or are they homonyms? Maybe they're neither — or maybe they're both! Learn the difference between homonyms and homophones, and if they're the same as homographs. 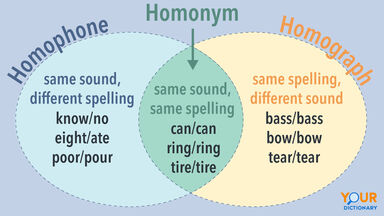 You may have heard the words homonym and homophone used interchangeably. Both words include the Greek prefix homo-, which means "same," and they both describe a relationship between two or more words. But their meanings vary slightly.

For example, the words eight and ate are homophones because they sound the same. The words bar (a metal stick) and bar (a place that serves drinks) are homonyms because they have the same spelling and the same pronunciation.

Another Definition of Homonym

Some sources define homonym as an overarching category that includes homophones and homographs (words with the same spelling but different sounds). According to this definition, a word pair would need to share either spelling or pronunciation to be a homonym. However, the stricter definition refers to a homonym as both a homophone (sounding the same) and a homograph (spelled the same).

What Is a Homonym: Same Sound, Same Spelling

Homonym is Greek for "same name," meaning that two words are spelled and pronounced in the same way. In other words, homonyms are multiple meaning words. All homonyms have different definitions.

Words that would be considered examples of homonyms include:

What Is a Homophone: Same Sound, Different Spelling

Homophones refer to any pair of words that sound the same, regardless of their spelling. For example, right and write are homophones because they sound the same but are spelled differently.

A few examples of homophones include:

Homographs are the opposite of homophones. These words are spelled the same, but they may sound different.

A few examples of homographs include:

How to Remember the Difference Between Homonyms and Homophones

The key to telling homonyms and homophones apart is in their Greek roots. Homonym means "same name" — words with the same pronunciation and spelling are homonyms. Homophone means "same sound" — words that sound the same are homophones.

Think of the phone in your pocket. Now think of your best friend's phone. If they rang at the same time, they'd sound exactly the same. How could you tell them apart? They look different — just like homophones.

Determining whether a word is a homonym or a homophone depends on the sentence's context — and on your dictionary's definition. No matter what the name of the word relationship is, choosing the right word helps you to convey your meaning. Learn more about word relationships with a guide on synonyms vs. antonyms.