Like vs. Such As: Difference and Tips on How to Use

When listing examples, should you use such as or like? It seems like these terms are interchangeable, but there are subtle differences in the ways you use them. Keep reading to find several such as vs. like examples that make their meanings clearer. 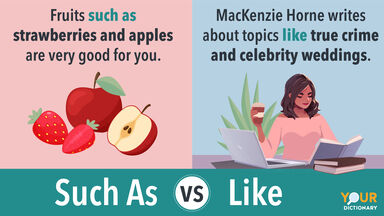 While they may seem interchangeable at first glance, such as and like have distinct meanings to be used in different contexts.

Such As: Meanings and Usage

The phrase such as is versatile in English. Such as can be used as an adjective or demonstrative pronoun, while as can function as a modifier or conjunction. When the words are put together, they can list examples or clarify.

Examples of Such As in a Sentence

If you are making a statement with examples attached, such as is a good choice. It indicates that your statement includes the following people or objects. Here are some examples of such as in a sentence.

Notice that you can use such as to introduce one, two or three examples. Four are acceptable if they are one-word examples. Anything more than that may affect your sentence’s flow.

Using Such As to Answer Clarifying Questions

A statement that does not include examples may prompt the clarifying question, “Such as?” A listener may not believe the statement, or they may believe it is too vague. To avoid hearing “Such as?” after these leading statements, the speaker may want to modify their sentences:

These sentences compare what the speaker wants with a similar experience. They want something like the examples listed, but not necessarily the examples themselves.

Can you use like when making a list? You can — but you can’t use such as when making comparisons. Therefore, the words are not completely interchangeable.

For example, take the first sentence from the previous section:

I want to live in a big city, like Boston or Chicago.

Using such as would include Boston or Chicago in the speaker’s choices. By using like, the speaker is saying that they want to live in a big city that is similar to Boston or Chicago, but not necessarily one of those two cities. Knowing when to use such as or like in a sentence can make your wording clear.

When to Use Commas Before Such As or Like

Lists with such as or like can either be restrictive or nonrestrictive clauses.

Don't Use Commas With Restrictive Clauses

Both of these sentences have restrictive clauses. The examples are specific and essential to the meaning of the sentence.

Do Use Commas With Nonrestrictive Clauses

Including a comma before like or such as indicates that the lists are nonessential. They elaborate on the sentence’s points, but removing them does not change or confuse the sentence’s structure or meaning. The sentence can stand on its own with or without the information offset by commas, so it does require commas.

Should You Use a Colon?

It may seem like you should use a colon after such as instead of a comma. You don’t need to include a colon because the phrase already establishes that a list is coming next. A colon is only appropriate after a phrase like "including the following," which comes after an independent clause.

Want to clear up more grammar issues? Get more sophisticated by learning how to use i.e. and e.g. when clarifying a point. You can also find out when etc. and et al are appropriate in a sentence with an informative article. Grammar is a powerful tool — but you have to know how to use it!