Identifying Differences Between a Cult and a Religion

The differences between a cult and religion have changed throughout history making it difficult to identify what separates these groups. Discover modern and historical definitions and examples of cults and religions to see what makes them different. 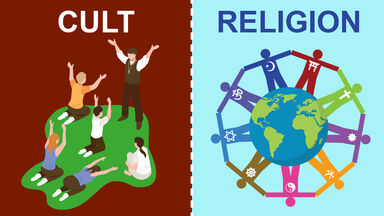 difference between cult and religion
Advertisement

What Is a Cult?

The common, modern definition of a cult is “a group of people with extreme dedication to a certain leader or set of beliefs that are often viewed as odd by others.”

While definitions of a cult can vary, these groups generally have a few common characteristics.

Exploring examples of cults can help you better understand what defines these groups. Famous cult organizations from recent history include:

What Is a Religion?

One common definition of religion is “a set of beliefs about God or the supernatural.”

Although each religion has different beliefs, there are some characteristics that group them as religions.

As of 2017, the U.S. Department of Defense recognized over 220 religions. According to the U.S. government’s policies on religious discrimination, traditional organized religions include:

Main Differences Between Cult and Religion

The definitions and examples of cults and religions highlight some of their differences. The main differences can be summed up by six factors.

Original Meanings of Cult and Religion

The original use of the term cult was reserved for religious groups who showed high respect to a particular Saint, for example.

Longevity of the Group

Many experts, including Philosophy professor Sam Fleischacker, argue that the main difference here is that a religion has lasted for generations, namely more than 100 years. Cults, on the other hand, don’t last long because they self-destruct or engage in unhealthy practices that limit their membership over time.

A Cult Is a Social Movement

In the early 1900s, the term cult was pulled from the religious context and used in a sociological context. For sociologists, a cult described a group with beliefs and practices that were socially deviant. Today, cults don’t always deal with religious beliefs, but religions do.

Religions are recognized and accepted by the government, but cults are not. In terms of law, there is no single, standard definition of religion. Different countries recognize different religions based on a variety of factors. Cults are not typically accepted by governments.

Thanks to the media and a few extreme groups, the mainstream view of cults is negative. They are viewed as traps maintained by mind control whereas a religion is more dignified, structured, and acceptable.

Cult Can Be a Temporary Term

The term cult is often applied to controversial new religions or religious groups. However, if the group proves it can last over time and assimilate into the mainstream culture in some ways, it may not be called a cult anymore.

Cults and religions are both groups of people who share a belief system, but they do so in very different ways today. Think about the belief system you adhere to and examine it against these factors to see if it’s a cult or a religion.