Idiom vs. Metaphor: How to Recognize the Difference

Idioms and metaphors are both ways to express an idea figuratively rather than literally. But are they the same thing? Can a phrase be both a metaphor and an idiom? Keep reading to clarify the meanings of each term and to learn the main difference between idiom vs. metaphor. 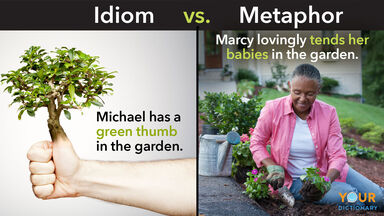 What Is an Idiom?

Both idioms and metaphors are forms of figurative language, which are non-literal ways to make your writing more interesting. However, idioms are well-known expressions that make a point different than what they actually say.

Examples of idioms and what they mean include:

You've probably heard these expressions and others like them many times. Idioms are colloquial ways to say something that wouldn't make sense to someone who wasn't familiar with the language. Saying that it's "raining cats and dogs" would be very confusing to an English learner who had never heard that idiom before.

What Is a Metaphor?

A metaphor is another form of figurative language. Like similes, metaphors compare two things that share one characteristic but aren't alike otherwise.

Examples of metaphors and what they're comparing include:

Like idioms, metaphors aren't literal. They are often used as poetic devices to make a poem more vivid. Extended metaphors are more complex versions of metaphors, and they can also occur in both fiction and poetry.

For example, describing a rainy day as "raining cats and dogs" is an idiom, not a metaphor, because it's not comparing rain to anything that makes sense. It's just an expression that means "raining a lot." A metaphor that describes a rainy day would be "The sky is a weeping child."

As you can see, metaphors tend to sound more poetic than idioms. Idioms are more common in everyday speech, while metaphors are a more effective way to compare concepts in writing. Writers sometimes lean on idioms because they're so well known. However, using too many idioms and not enough metaphors can make a writer sound clichéd.

Can Idioms and Metaphors Be the Same?

If you can think of a few exceptions to this rule, there's a good reason. Some metaphors have become so well known that they have practically become idioms themselves.

You may think these common expressions are idioms, but they're not. Because they function to compare two things, they are simply very common metaphors.

So Many Idioms, So Little Time

English has thousands of common idioms and millions of ways to use metaphors. Now that you know the difference between metaphors vs. idioms, you're likely to notice them everywhere you go! For more help on idioms, check out 100 American idioms to test your knowledge. You can also use these German idioms to spice up your conversations.