Imbed vs. Embed: Is There a Difference?

It can be hard to tell the difference between words that are spelled similarly or that sound the same (or nearly identical) when spoken. You may have seen both imbed and embed in writing. If so, you're probably wondering whether both versions are actually words and if there is a difference. Discover what you need to know to navigate imbed vs. embed in English language usage. 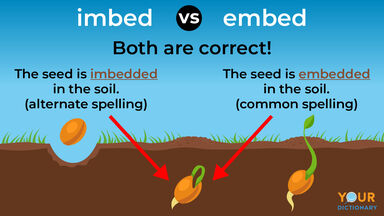 Imbed vs. Embed: Which to Use

Imbed and embed actually mean the same thing. They are just alternate spellings of the same word. It is correct to use either term and both words mean the exact same thing. However, embed is the most common spelling. If you want to make sure that no one questions your spelling or meaning, it's probably best to use the version of the word that begins with an "e."

What Do Embed and Imbed Mean?

Embed (im-ˈbed), which can also be spelled as imbed, is a verb. It has a few different meanings.

On rare occasions, the word embed (or imbed) might be used as a noun. For example, in the case of a journalist who is embedded with a military unit, members of the unit might refer to the journalist as "an embed" or "the embed."

Alternate Forms of Embed and Imbed

Sentence Examples: Forms of Both Spellings

The terms embed vs. imbed, as well as alternate forms of both spellings, can be used interchangeably in sentences.

Clarity Is the Key to Avoid Confusion

Because clarity is such an important consideration for writing, it's advisable to use language that will clearly convey your meaning to readers. The more clear the message, the easier it will be for people to understand your intended meaning. Even though embed and imbed are both correct spellings that mean the same thing, it is best to choose the most common option. For that reason, it's generally better to use embed in your writing instead of imbed. However, either word would be correct.

While you're thinking about choosing between words that are similar, it's a great time to improve your language arts skills even more. Take the time to learn how to tell the difference between even more commonly confused words. Start with words like amoral and immoral.