Imminent vs. Eminent: A Difference That Stands Out

Would you refer to someone as imminent or eminent? Only one vowel and one “m” separate eminent and imminent, but despite these similarities, the words are unrelated. 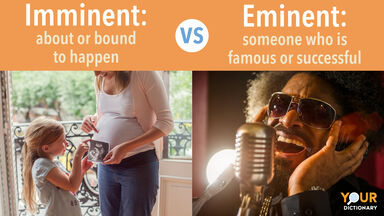 The Difference Between Eminent and Imminent

Imminent and eminent are pronounced similarly but have unrelated meanings, origins and spellings.

Using Imminent in a Sentence

Imminent is an adjective that means “about to happen,” “impending” or “upcoming.” It is derived from the Latin words in (towards) and minere (to project).

Meaning and Usage of Eminent

Eminent is defined as “a successful or famous person.” The word comes from the Old French éminent and the Latin term eminentem, which means “prominent” or “projecting.”

The adjective immanent is pronounced the same way as imminent, so they are sometimes mistaken for one another. Immanent means “existing or operating within” or “innate.” In religious contexts it means “transcendent” and in philosophy, it means “taking place within the mind.”

Tricks to Remember the Difference

Eminent, imminent and immanent are all separate words. You can use tricks to remember each meaning and spelling.

Sometimes changing the initial vowel of a word makes all the difference. Take elicit and illicit for example. Another example of changing the vowel to change the meaning is enquire vs. inquire.