Implicit vs Explicit: A Clear Guide to the Differences 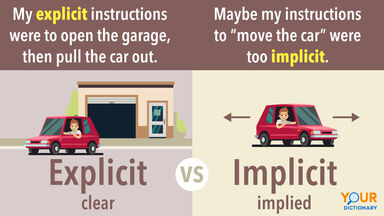 What Is the Difference Between Implicit and Explicit?

While explicit and implicit look similar at first glance, they are in fact opposites.

How to Use Explicit in Context

Explicit is an adjective that means something is specifically expressed. If something is explicit, it is clear and without question. The word comes from the Latin explicare, which means "unfold, unravel or explain." It can also mean something is fully developed or something that is graphically detailed or vulgar.

How to Use Implicit Correctly

Implicit is an adjective that means "to imply or suggest something." Even if something is not clearly expressed, the implied meaning is clear. It can also mean closely connected to or engrained in something or having confidence in someone or something.

Use these words that begin with the same prefixes as reminders, so you will always remember the meanings of implicit and explicit.