Into vs. In To: Simple Ways to Tell Them Apart

It’s easy to assume that every instance of in and to appearing next to each other should actually be into, but that’s not always the case. Even though the only thing separating the two is a space, into and in to have vastly different meanings and applications. 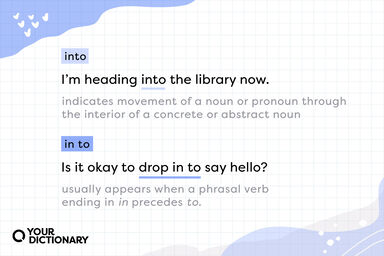 Into vs In to Definitions and Examples
Advertisement

Into, in, and to are all prepositions. Prepositions describe the relation of a noun or pronoun with another noun or pronoun. This is usually a positional relation, like above, below, before, or after.

Into typically indicates movement of one thing going inside another. In to usually appears with phrasal verbs that end with in, like give in and drop in.

How To Use ‘Into’

Into is used when something moves through the interior of a concrete or abstract noun. These items can include a place, an item or a thought.

While it might be tempting to use in, in describes an object when it is already in its place, not when it is moving there. If your noun ends up within another noun by the end of the sentence, you’ve used into correctly.

‘Into’ Used in Transformation

Another way to use into is when one noun transforms into another noun. This process can be magical or figurative, depending on the rest of the sentence. Check out these sentences in which into indicates transformation.

A phrasal verb is a phrase that combines a verb with a preposition or adverb. A ton of phrasal verbs have in as their last word:

These phrasal verbs come as a pair, meaning in stays as in even when it precedes to.

‘In’ and Infinitive Phrases

If you haven’t memorized every phrasal verb in existence or otherwise don’t know whether to combine in and to, an easy trick is to ask one simple question: Where? Sentences that use into typically answer that question.

When you see into or in to in a sentence, ask yourself “where?”. If the latter half of the sentence answers that question, use into.

Alternatively, replace into or in to with in order to. If in order to fits, you can use in to.