Inductive vs. Deductive: What Kind of Reasoning Are You Doing?

Sherlock Holmes was one of the greatest detectives in history (well, fictional detectives, anyway) whose astute power of deduction enabled him to solve a crime with time left over for tea with Watson. But you may be surprised to learn that Holmes’ famous conclusions weren’t always the result of deductive reasoning — in fact, they mostly came from inductive reasoning. So what’s the difference between inductive vs. deductive reasoning? It has more to do with grammar than even Sherlock Holmes himself may know. 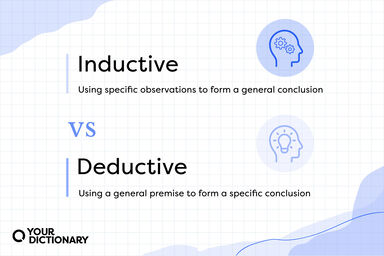 Inductive vs Deductive with icons and definitions
Advertisement

Inductive: From Specific To General

You probably see examples of inductive reasoning every day. They may include:

When you use too few examples to prove a general conclusion, as in the examples above, you end up making hasty generalizations (also known as “jumping to conclusions”). Sherlock Holmes certainly used inductive reasoning when surveying a crime scene, but he used many pieces of evidence to arrive at his conclusions — making his reasoning valid.

Deductive: From General to Specific

Which One Is More Reliable?

If you work as quickly and have as much background knowledge as Sherlock Holmes, then inductive reasoning is probably pretty reliable for you. After all, it uses your observations to come up with a logical conclusion — and it’s valid as long as you have enough evidence.

However, if you need to take your time and prove a general premise before coming up with a conclusion, you’ll probably depend more on deductive reasoning. It’s not as open-ended as inductive reasoning, but with thorough consideration and review, your conclusion may hold more water than an inductive argument. (Just avoid those fallacious statements!)

Looking for effective ways to prove your point in writing and speech? Check out: