Infer vs. Imply: A Straightforward Guide to Using the Right Word

When you hint at something, are you inferring or implying? It may seem like you can use these similar words interchangeably, but they have quite different meanings. In fact, they describe two completely different situations. 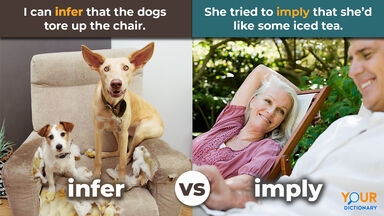 Infer and imply are verbs that show opposite actions. The difference between them is in their definitions:

When one person implies something, the second person can infer their meaning. For example, if you say "I'm in the mood for pizza," you're implying that pizza would be a great meal. Someone can then infer that you'd like pizza for dinner.

Memory Tricks for Infer vs. Imply

When deciding which word to use, you might not always have time to stop and think through the definitions. Don't just guess and hope that you are correct! Instead, use these simple memory tips to help you quickly choose the correct term.

The word infer means to make an educated guess or to draw a conclusion from available information. You infer (also known as making inferences) all the time based on clues from your environment. You can substitute the word guess for infer to make sure you're using it correctly.

Using Infer in a Sentence

So how do you use infer in everyday writing or conversation? Examples of properly using infer in a sentence include:

Imply Definition: Hinting at Your Meaning

Have you ever made a point without actually stating how you feel? That's how you imply your position — by hinting at your meaning without using direct words. When you imply, you allow others to make inferences about how you feel. Exchange the word hint for imply to ensure that you're using the right word.

Learn the Difference Between Similar Words

Imply and infer are just similar and dissimilar enough that it can be tough to tell them apart. Take the time to learn how to tell the difference between some other similar-sounding words, such as evoke and invoke. The more you learn about differentiating words that are easily confused, the stronger your vocabulary will become.