Inter vs. Intra: Learning the Difference

Do you know the difference between the prefixes inter and intra? These prefixes sound similar enough that they seem interchangeable, but they're definitely not. Keep reading to learn when you should use inter vs. intra, and what they both mean. 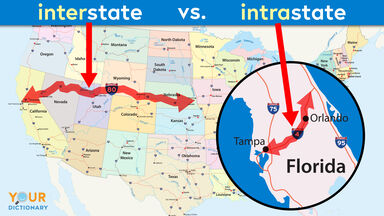 Even though inter and intra are both Latin prefixes, they have almost opposite definitions. The basic meanings of these words are:

Words that begin with inter describe connections between objects, groups or ideas. However, words that begin with intra indicate something inside of a group or within an object. You can probably see why mixing these words up would be confusing! The key to knowing which one to use depends on the context of your sentence and what you are truing to say.

When to Use Inter

You use inter when describing an action that goes between two groups or objects. For example, "international relations" refers to the relations between two or more countries, and an "interstate" is a highway that connects two or more states.

More examples of the prefix inter include:

You can probably think of a dozen more examples of this popular prefix. In most cases, they are describing the relationship between or among two nouns. The prefix intra wouldn't work if you substituted it in these words.

When to Use Intra

Intra is a prefix that you use when describing an action that happens within or inside a noun. It can refer to activities within a group or a verb happening inside of a singular noun. You're most likely to see words that begin with intra in the science or medical fields.

Words that use the word intra include:

Now that you've seen examples of words that use inter and intra, you can see that they are definitely not interchangeable. There are even some words that completely change meaning when you add the other prefix! Some of these words include:

Why They Get Confused

So if these prefixes are so different, why do they get confused all the time? It's an understandable mistake, not only because the words sound so similar, but because of another Latin root: internal, which means "inside." Intra evolved from the earlier Latin word internus, which also means "inside," as opposed to the existing Latin root inter.

Some people believe that words beginning with inter and intra, such as "intramural" or "interactive," should be hyphenated as "intra-mural" and "inter-active." But like all words with prefixes, you don't need a hyphen between the affix and the word. Words that include inter and intra are not compound words, and therefore wouldn't need a hyphen.

Vocabulary Makes All the Difference

Knowing the difference between inter and intra can keep you from making an embarrassing — or life-threatening, if you're a doctor — mistake in the workplace. If you'd like to clear up any more vocabulary misunderstandings, check out the difference between emigrate and immigrate. Learning how to use among vs. amongst might also be useful. You can also avoid showing up for the wrong meal if you know how to tell supper and dinner apart.