Invoke vs. Evoke: Avoid Mistakes With These Tricky Words

Does the smell of chocolate cake invoke or evoke memories from your childhood? What's the difference between these words, and does it matter? Find out how to properly choose between invoke vs. evoke when you're writing or speaking. 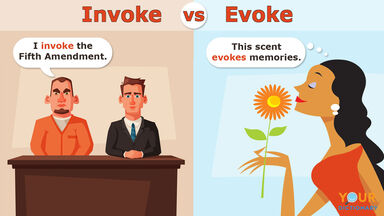 The Difference Between Invoke and Evoke

The words invoke and evoke sound similar because they both come from the Latin root vocare — "to call." However, their meanings have an important difference.

You have the power to invoke something, such as your civil rights, a school rule or another source to support you. Objects or people can evoke memories, feelings or emotions to you.

If these words are still too similar to tell apart, try out a quick memory trick. The word evoke has an "e," just like the words memory and emotion. When something reminds you of a memory or stirs an emotion, choose evoke with an "e."

How to Use Invoke

Invoke is a useful term when you are calling for support or making a request. You can use it:

For example, when a person who is accused of a crime chooses not to answer a question in court to avoid self-incrimination, that person is exercising their right to invoke the Fifth Amendment to the United States Constitution. In other words, that person is putting that specific protection into place by saying so out loud.

Using Invoke in a Sentence

Typically, you'd use invoke in more formal situations, including legal cases and contract agreements. It also appears in religious or spiritual contexts when calling forth a deity or spirit. For example:

How to Use Evoke

Evoke also has multiple meanings, but none relate to calling for action or making a direct request. The word evoke refers to recalling or bringing something to mind rather than acting in a direct way. It's the correct word choice when:

For example, when a smell causes a memory to come to mind, that smell is evoking the past. If the smell of a certain type of flower or plant that grew in the yard of your childhood home always makes you feel like you're back there, then that odor is one that evokes a memory for you.

Using Evoke in a Sentence

The following example sentences provide options for using the various forms of the word evoke in a sentence. It would not be correct to substitute the word invoke in these sentences.

The Supernatural Meanings of Invoke and Evoke

The most common way for writers to confuse these words is when they’re using them as synonyms for conjure. Technically, both invoke and evoke can reference conjuring spirits or other supernatural forces. However, the key difference is:

Now that you can choose between invoke and evoke, go ahead and build your skills with other challenging word pairs. Start by mastering the difference between infer and imply. From there, discover some of the most commonly confused words in the English language.