Exploring the Difference Between Irony and Sarcasm

When it comes to irony vs. sarcasm, it’s hard to see the difference between these two terms. However, irony is the opposite of what you would expect. Sarcasm, on the other hand, has a condescending tone meant to embarrass or insult someone. Therefore, the negativity in sarcasm is the clear difference. But, it’s not the only one. Break down irony vs. sarcasm to see the differences between them. 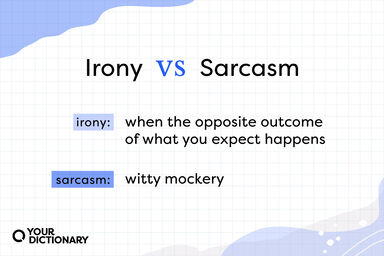 Irony vs Sarcasm With Definitions
Advertisement

To remember irony, think opposite. The reason why is due to the definition of irony, which is when the opposite outcome of what you expect happens. It sounds a bit confusing, but irony is quite easy to understand. For example, a stylist is teaching a course on safe clipper usage and accidentally shaves a person bald right down the center of their head. It’s ironic because it's the opposite of what you would expect to happen in a clipper safety course.

When it comes to irony, there are a few different types you’ll find in life and literature. Knowing the difference between each one is important to understanding irony vs. sarcasm.

Need a few more ironic examples to drive this point home? Dive into these fun and creative examples of irony.

Verbal irony seems a lot like sarcasm, doesn’t it? However, verbal irony and sarcasm have one distinct difference, which is negativity. Sarcasm is typically witty mockery. Therefore, it has a negative connotation, whereas verbal irony doesn’t.

It can be helpful to look at the two side-by-side to see the difference.

See how with verbal irony, it’s ironic because muddy paw prints are never enjoyed on white carpet. Instead the opposite is true, they are frustrating and a mess.

However, sarcasm is making a cutting or sneering remark about buying white carpet with children and pets. Looking at the two next to each other, it can be easier to see how they are different.

With a clear understanding of sarcasm, it’s time to check out some fun examples.

Sometimes the difference between irony and sarcasm can be hard to see. However, once you start to break down definitions, it’s clear to see that sarcasm is like irony with attitude. Sarcasm doesn’t have any other purpose but to insult or embarrass, even yourself.

Since you know a bit about sarcasm and irony, it’s important to explore sarcasm vs. irony vs. satire. Satire used irony, sarcasm, and ridicule to show the ridiculousness of some human traits or organizations. Satire examples will show you it’s many faces.