Is It Baloney or Bologna? Definition and Comparison

Sometimes, the mood calls for a word that describes both nonsense and deli meats with some origins rooted in geography and good old-fashioned American marketing. That’s where baloney comes in. Or is it bologna? 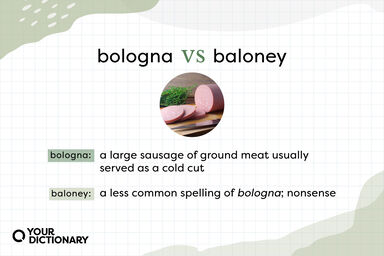 Baloney or Bologna: Which One’s Right?

Bologna and baloney come in a few forms that may or may not refer to the deli meat. Bologna is the more common and widely accepted spelling when referring to the meat, while baloney is an alternate spelling that is more often applied to “nonsense or foolish talk.”

Here’s a quick cheat sheet to help you differentiate between all the variations:

Before bologna or baloney, there was mortadella. From Latin murtatum (referring to a sausage seasoned with myrtle berries), mortadella is a type of Italian pork sausage that originates from the city of Bologna, Italy. Much like the baloney of today, mortadella was served in thin slices.

Mortadella gained a reputation as a renowned delicacy. Its regional importance led to Italian authorities setting strict guidelines and definitions about what could legally be called mortadella in 1661, ensuring the meat’s quality and culinary purity.

Bologna: My Bologna Has A First Name

Anything resembling mortadella’s recipes instead took the name of the meat’s city of origin, which is how we get to bologna. The exact introduction of bologna (the meat) to the States isn’t well known, though most records suggest it arrived with German immigrants.

Bologna’s popularity grew in the early 1900s, particularly during the Great Depression, thanks to its relatively cheap price compared to ham, poultry and other meats and Oscar Mayer’s vacuum packaging technology that increased shelf life.

How to Pronounce Bologna

The Italian city of Bologna is pronounced “buh-lo-nya” (think lasagna). The non-mortadella meat bologna was also pronounced the same initially.

If you’re in North America, “buh-lo-nee” is the preferred pronunciation. “Buh-lo-nya” might get you some confused looks.

A Load of Baloney

The change in pronunciation is how we eventually got to baloney. Records suggest that baloney became an alternate spelling for bologna as far back as 1894.

Over time, baloney also became slang meaning “deceptive or foolish talk” or “nonsense,” which was a reference to the deli meat being made from odds and ends. Baloney has also been used unkindly to describe another person as an idiot, though this has become less common today.

A Baloney By Any Other Name

Whether you’re nostalgic about bagged lunches of baloney on white bread or cringe at the thought of the mystery meat, baloney has a long history, as a word and as a food product, that’s worth knowing. For some more food for thought that you can sink your teeth into: