Key Difference Between Jealousy and Envy

Whether you are jealous or envious, the feeling isn’t a good one. While these two words might seem interchangeable, they are each unique. Explore the definition for jealousy vs. envy through examples. 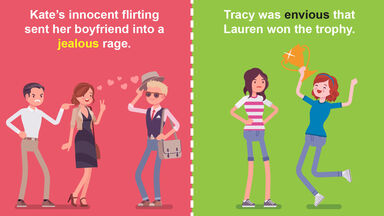 difference between jealous and envy
Advertisement

What’s the Difference Between Jealousy and Envy?

So what does it mean to be jealous? Jealousy describes a feeling of protectiveness or insecurity you have over a rivalry or being replaced. This typically happens in a significant relationship and requires three people (you, the significant person, and another).

For example, if someone flirts with your boy- or girlfriend, it produces jealousy. You feel resentful, hurt, and angry that person is flirting with someone you love. You might even start to worry that person can and will replace you.

Need a literary reference? Give these modern and classic jealousy themes a try.

Check out a few more examples of jealousy through these unique sentences.

Envy is often confused with jealousy. However, where jealousy takes three parties to happen, envy only takes two. Envy is internal longing you feel for something someone else has. You could be envious of anything from a personality trait to a possession. In pop culture, envy can be a great trait to drive a villain. For example, Buddy Pine was envious of the incredibles super powers in the movie Incredibles.

Jealousy isn’t the only theme running rampant in literature. You can find envy too. Explore these literary examples of envy.

Examples of Envious in a Sentence

Now that you’ve seen envy in fiction, it’s time to check out how it might be used in a sentence.

Jealousy vs. Envy in Bible Examples

It’s time to get Biblical. Well, to look at Biblical meanings, that is. Both envy and jealousy can be found in the Holy Bible in different contexts. These contexts can make an important distinction between the two words.

Jealous and Envious: the Difference

While jealousy and envy can overlap and intertwine, these two words do have some subtle differences. Therefore, using them correctly in grammar is key. Now that you know the difference between jealousy and envy, you might want to check out our vs. are.