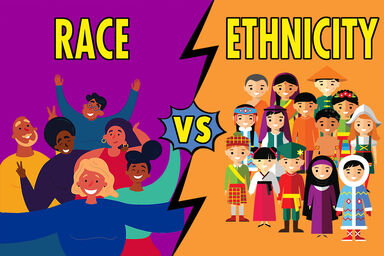 use of race vs ethnicity
Advertisement

Race and Ethnicity: What’s the Difference?

What does race and ethnicity mean? The race and ethnicity debate can be hard to dissect. That’s because, a lot of times, these two terms interweave within each other. A person’s race could come from their cultural identity. Or, the two could be distinctly different.

That is putting it very simply. To gain a new perspective on the key differences between race and ethnicity, it’s important to look at the two terms individually by breaking down their origins.

What Does Race Mean?

What is race? The answer to that question is a lot harder than you might think. The dictionary defines race as similar physical characteristics that are used to classify people.

So, your race refers to the specific physical features you might have that are distinctive to a group of people, like the color of your skin, shape of your eyes, or texture of your hair. Depending on your location, racial groups can vary, but a few common groupings include white, black (or African American), Asian, American Indian, and Pacific Islander. Race can have a cultural undertone as well.

Historical Origins of the Term “Race”

The term for race dates back to the 16th century; however, it wasn’t until the 18th century that it was used by the English to classify or sort people. They used it as a way to classify people who had features different from theirs. The trend continued into the 20th century.

Race also became a way to enslave, segregate and discriminate against groups of people who were considered inferior based on common physical features. The most known example of this social injustice is how Africans were enslaved by the English well into the 19th century.

Currently, the term “race” is a way to classify populations. For example, the United States Census uses race data for demographics of an area.

Race Is a Social Construct

While some people might consider race as based on biological factors, it was proven that, generically, all humans are 99.9% alike. Race is nothing more than a classification tool. However, the social division created by the historical use of the term still exists to this day.

When it comes to ethnicity, this is all about your culture. From the language you speak to the customs you follow, this is your ethnicity. The term includes the traditions your grandmother passed down to you through her nursery rhymes. It could be the heritage that you gained from your parents or the society that you grew up in.

Ethnicity can get complex, but a few examples include British, Dutch, Bengali, Filipino, Sioux and French.

Unlike race, ethnicity is a relatively new word. It first appeared in 1941 but didn’t make it to the dictionary until 1972. While it was supposed to replace words like minority and race, it was found that ethnicity was a distinct word all its own. It is a merging of your cultural traditions, language, religion and beliefs.

Currently, ethnicity is complex and not one-sided. It has several subcategories that have grown and expanded in complexity. You might see yourself as Japanese American because your parents are Japanese, but you grew up in America. You might also be Afro-German or British American.

Much like race, ethnicity has less to do with biology and everything to do with upbringing and culture.

Other Key Race vs. Ethnicity Differences

While the terms and origins are the key differences between race and ethnicity, there are other subtle differences you can find.

One noticeable difference in race and ethnicity is how people classify themselves. You’ll typically see people identify as one race but multiple ethnicities. For example, a woman might think of her racial identity as white, while her ethnicity is Irish American. Race typically encompasses a larger group of people, whereas ethnicity is more specific.

Ethnicity is all about your culture; therefore, you can choose to adopt it, broaden it or even completely ignore it. For example, you might call yourself American, even though you were raised by Dutch parents in America.

Race, on the other hand, is not something that can be changed. You can’t change the color of your skin or the shape of your eyes. These are physical features that you are born with.

When it comes to race and ethnicity, the lines between the two are anything but clear. While there are key and subtle differences between the two, there is also a lot of overlap. Gain a further understanding of racial oppression by exploring civil rights issues.