No Argument, There's a Difference Between Argue and Debate

Debates and arguments are two types of discussions. And, you could debate or argue all day about how they are the same thing or entirely different. Let’s settle the debate once and for all with an in-depth look at what “debate” means and what “argument” means. 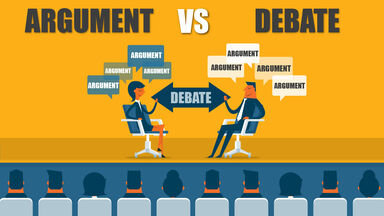 “Argument” and “debate” are both nouns. They are both things, but they are different kinds of things. That’s how you’ll be able to see the difference between them. Let’s explore further.

“Debate” can be a noun or a verb, but to compare it with “argument,” let’s stick with the noun form. It comes from the Old French word debatre, which means “to fight or contend.” It is defined as a:

Formal discussion of the opposing sides of a specific subject

The word “argument” is always a noun. It comes from the classical Latin argumentum, which means “evidence or proof.” It is defined as:

A reason or reasons why you are for or against something.

One Is Part of the Other

An argument is a part of a debate, which is the whole. In other words, a debate is made up of a bunch of arguments and counter arguments. Arguments are the proof needed to have the debate, or to discuss the opposing points of view.

A Difference in Formality

In their common use, a debate is considered more formal than an argument. However, a debate can be informal and an argument can be formal. Looking at examples of these two words can help you better understand what makes them different.

Informal Use With Examples

Formal Use With Examples

A formal debate is a scheduled event that involves specific debate rules and enforcement of those rules.

A formal argument is part of a debate and it needs to include supporting details so it is more than just one person’s opinion.

How They Differ From Other Similar Words

“Debate” and “argument” have many other synonyms since each is another word for “discuss.” It can be confusing trying to figure out which word to use. Check out some simple explanations of what other discussion words mean to help you decide.

Argument includes evidence to back up your point. Persuasion is your belief or opinion, or it can be the act of convincing someone to agree with you.

Arguments can be heated, but they make a point that isn’t necessarily contested. Disagreements are often heated and imply a difference of opinion.

Discussion vs. Debate vs. Argument

Debates and arguments are types of discussions that exchange opposing views.

Conversation vs. Debate vs. Argument

Debates and arguments are types of conversations if they are spoken.

Fight vs. Debate vs. Argument

A fight is a conflict, whereas debates and arguments are exchanges of views that can be civil.

Now that you’ve seen the arguments about how “debate” and “argument” differ, the debate on how to use them is settled. But, are you guilty of misusing other words? Do you know the difference between “stationary” and “stationery,” for example?